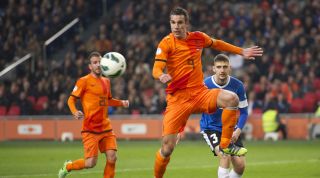 "Recently, the coach [Louis van Gaal] said something I'd never heard before in my football life," Robin van Persie said earlier this year. "He told me I was one of the elders in the squad."

With maturity comes responsibility. Before the historic July friendly against Indonesia in Jakarta, the Manchester United forward was named captain of the Dutch national team. "I'm very honoured with this," he told reporters after the game.

Since Van Gaal's appointment in July 2012, Van Persie has led by example with nine goals in 11 games. His brace against Andorra last time out secured World Cup qualification, while his own place in history has been improving all the time.

Those nine qualification goals have taken him to 38 for his country, helping him overtake some of the true greats of Dutch football in the all-time scorers list: Johan Cruyff, Abe Lenstra (both 33); Ruud van Nistelrooy, Faas Wilkes (both 35) and Dennis Bergkamp (37). Now only Patrick Kluivert stands in his way – and Van Persie is two away from equalling his record.

Kluivert, now Van Gaal's assistant, managed 40 goals from 79 games; Van Persie's next appearance will be his 80th cap. "It's really great that Patrick is now one of my coaches," Van Persie told De Telegraaf. "He helps me, wants me to surpass him in terms of goals. After each game we sit together to watch DVDs: he wants to correct my mistakes and we talk about the details."

Van Persie is expected to lead the Dutch line at next summer's World Cup – a role he also undertook at the last one. Despite starting every game in the South Africa campaign as Oranje reached the final, he finished the tournament with just one goal.

"However hard I find it to accept, I wasn't on top of my game," he told Henk Spaan in FT Magazine. "In the whole World Cup, I was only put [through] in front of the keeper four or five times." Public opinion turned on him, with calls for No.9 duties to be handed to Klaas-Jan Huntelaar; despite playing a peripheral role, the younger man scored the same amount as Van Persie in South Africa.

Huntelaar or Van Persie turned into a debate that divided the nation. Newspapers ran polls in the lead-up to Euro 2012; some went for Huntelaar by a landslide. However, the only opinion that mattered belonged to manager Bert van Marwijk, whose mind was already made up.

He opted for Van Persie off the back of a breathless season for Arsenal (30 goals in 38 games), even if Huntelaar matched him stride for stride at Schalke (29 goals in 32 games). Each man won his league's Golden Boot.

"Of course I'm angry and disappointed," Huntelaar said after learning of the news from Van Marwijk, following a training session days before the tournament. He had every right to be: going into Euro 2012, he had scored 15 goals in his last 17 games, while Van Persie – who had made his debut in June 2005 – had only managed that amount in his last 26 matches, spanning three years.

Huntelaar's overall record for Oranje is 34 goals in 60 caps, an impressive return for a player never considered first choice in all of his seven years as an international. But ultimately Van Persie is seen by Van Gaal as best suited to getting the best out of his system.

Since the disappointment of Johannesburg he's unleashed the world class player in him – and defying common wisdom in the process, according to his manager. "He's getting better and better - it's incredible," Van Gaal said last December. "I have never seen any player reach Robin's age and still improve as a footballer."

Van Persie has been reliabily prolific at club level, with 95 goals in 138 games. He has a similar goal-to-game ratio with Oranje: 19 goals in 28 games.

"Van Persie goes to where the ball will be, before anyone knows it will be there, and that's a mysterious gift to have," says David Winner, author of the critically acclaimed Brilliant Orange. "[Dennis] Bergkamp never had that, and nor did [Marco] van Basten. It reminds me of Gerd Müller, the way he checks a run, finds space, and finishes so efficiently with that perfect technique."

Another trait Van Persie shares with Müller is the uncanny ability to score just about every type of goal, often in the most unlikely of situations; whether creating for himself or finishing a team effort, being acrobatic and dominant in the air makes the difficult look easy.

"Robin possesses a photographic memory for football situations," said René Meulensteen last season, while coaching him at Old Trafford. "His left foot is like Roger Federer's forehand: technically perfect and costs minimal strength to execute. Everything he does is measured."

It comes as no surprise to learn the player who made the greatest impact on him was compatriot and former Arsenal team-mate Dennis Bergkamp; after witnessing a 'passing exercise' in training, Van Persie would later comment. "I thought it was art. It gave me the answers I was looking for. His drive and concentration opened my eyes. I knew I had a long way to go if I ever wanted to reach that level."

Van Persie's game – awareness, vision, movement, creativity and link-up play – is rightfully lauded. He is essentially a quasi-playmaker/forward. "In Holland we call positions by their numbers," he explains. "No.9 is the main striker and No.10 is the one just behind. I prefer to call myself nine-and-a-half. I like to drop off sometimes and be part of the game. I'm still a bit of a behind-the-striker player when possible."

On the eve of Euro 2012, Tonny Bruins Slot – a respected analytical Dutch coach who managed Ajax to the title in 1985 before becoming Johan Cruyff's right-hand man at Barcelona – anointed Van Persie by announcing he could play a similar role to that played in 1974 by the iconic Cruyff.

"Johan always started as the team's forward," Bruins Slot explained, "and then dropped a bit deeper to direct play. That created space for wingers like Rob Rensenbrink and John Rep, and midfielders such as Wim van Hanegem and Johan Neeskens."

Although it never came to fruition, there's a better chance of it happening under Van Gaal, whose approach is essentially the 'Ajax model': creativity and cleverness inside a proactive and fluid 4-3-3, with wingers providing natural width – as well as support in the middle – supplying Van Persie, who is supported by two advanced midfield playmakers anchored by a single pivot.

After what has been a slow start for his club, Van Persie can turn his attention back to Oranje. If he can shake off a minor injury, he could face Hungary in Amsterdam on Friday and Turkey in Istanbul on Tuesday; if he scores three goals, he can etch his name into Holland's history. And it will be well deserved.