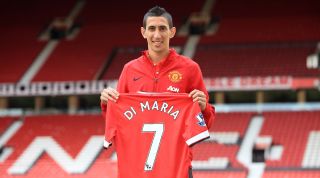 "We're delighted to welcome Angel di Maria to Manchester United's warm, unyielding embrace," Woodward said. "I'm sure he will enjoy the next – and final – chapter of his career, but if he doesn't, well, there's absolutely nothing he can do about it."

Woodward took the unusual step of reading out the contract's small print, which consisted mostly of various types of natural disaster that would fail to invalidate it.

Di Maria, who Woodward confirmed has a buy-out clause of infinity pounds, said that he had been impressed by United's keenness to complete the deal as quickly as possible.

"Mr Woodward showed his professionalism by quickly switching off the television when I came in, even though United were playing at the time," Di Maria told reporters.

Woodward went on to say that the club was still working on getting Juventus's Arturo Vidal to Old Trafford, and that club officials were camped outside his home with chloroform pads and a large sack.