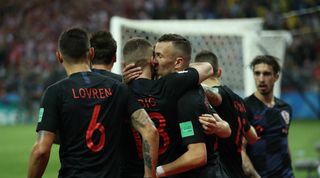 The air sure is thin here. This is the time in tournaments when England are usually engaged in a root and branch review and when some poor scapegoat is being brutalised on the back pages. Not this time. 48 became 16, 16 was wittled down to eight, and now we're here: four teams left and England, amazingly, are among them.

They remains so but, sadly, in name only: they will compete in the third-place playoff on Saturday, having lost 2-1 to Croatia after extra-time.

Continuity - again - had been England's start point. Gareth Southgate named the same team which had started four of the five games, again keeping faith with the back-three, again opting for Jesse Lingard's thrust from midfield. Croatia, perhaps unexpectedly, deferred to security. Beaten down by the attritional games against Denmark and Russia, both of which went beyond 120 minutes, Zlatko Dalic restored Marcelo Brozovic to his midfield. The message was clear enough: Dalic was expecting an assualt and he wanted protection.

And an extra man in midfield alongside Luka Modric and Ivan Rakitic? That couldn't be a bad thing, especially given England's understandable fear of that Clasico pairing. Nevertheless, the Croatian selection was respectful, maybe overly so, and it betrayed a manager who was possibly overly-concerned with an opponent's threat.

By the end of the evening that looked like a premature assessment, but it was still a strange approach: as his players would go on to show, he had the greater talent at his disposal.

It was also a semi-final which offered Croatia a chance of reaching unknown territory. Barring their wonderful summer in 1998, they've been a perennial disappointment at international tournament and this, their last World Cup with the golden Modric, Rakitic generation, offered a final chance for validation. It created pressure which, early on, leaked into their game. While England passed their way into the match, their opponents prodded nervously - and clumsily.

Inside five minutes, Modric had bundled Dele Alli over on the edge of the box after Jesse Lingard had slithered into the final third. It was in Gascoigne range, Beckham territory. Tonight, it was perfect for Kieran Trippier, who arched the free-kick up and over the wall and high into Danijel Subasic's net. Early. Really early. But a perfect start.

...and it weakened them initially

The goal jolted Dalic's players. Denied the ability to ease into the occasion, their structure quickly began to creak. England would have to wait until the half hour for another clear chance, with Subasic spreading well to deny Kane, but prior to that Sterling and Lingard had prowled with menace. Southgate's tactic was clear enough: employ quick transitions to isolate and exploit an immobile centre-half pairing, then get quick feet on the ball as often as possible.

It worked, too. Sterling was as menacing as he had been in an England shirt for a long time and when Lingard shot wide after good work from Alli and Kane, Southgate was close to the second goal he desperately wanted and which his side would have deserved.

The mind began to wonder back to Croatia's quarter-final and to those tired bodies which collapsed to the floor after beating Russia. It's certainly easier to look like a tired side when trailing, but they were a blunt team in the first-half, sloppy in possession and never looking likely to force an equaliser. England succeeded in exposing issues which were real enough, but you did wonder how much they'd been exaggerated by tournament fatigue.

Fatigue - clearly - had been overstated

But this has been a long competition for England, too, and that strain started to show in the second half as the feared Croatian technique became more vivid. The sideways passes of the first 45 minutes were gone and, galvanised by urgency, Modric and Co began to cut the lines. England survived for a while, dropping deep and protecting Jordan Pickford, but eventually the resurgence told: Ivan Perisic beat Kyle Walker to Sime Vrsalko's whipped cross and cut his team level.

England rocked. The possession was gone, with it the control. Perisic nearly added a second minutes after his first, denied only by the post after a defensive mix-up. Suddenly, this was old England: uncomposed, backs-to-the-wall, anywhere will do England. Hello again, old friend. This was a game entirely changed. Croatia had dragged themselves off the canvas, finally had their foot on the ball and, by the end of normal time, were comfortably the better side.

At the whistle, Dalic's over-deference to England's strengths really looked like a smart way of drawing their sting.

Croatia's had the efficiency when it mattered

Extra-time is often an ordeal; a thirty minute trudge towards the penalty minutes. Not this time - unfortunately. Mandzukic had one chance to win the game, but was brilliantly denied by Pickford. Sadly, England gave him another: an aimless header drifted through the England box and this time Mandzukic was not to be denied, shooting across Pickford and in.

The irony, of course, was that England were supposed to get stronger as the game went on. After Croatia's gruelling tournament past they were supposed to wilt as the shadows crept in. Not so. By the time the scoreline changed for the third and final time, Southgate's players were spent.

They go out. They've won friends and admirers, they've repaired their relationship with the public back home, but they go out all the same. Maybe football will come home some day, and after these few weeks there's reason to believe that it might, but it won't be this year.