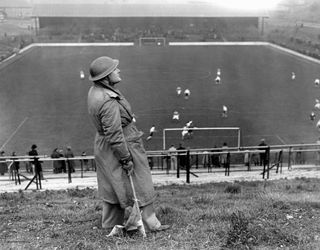 The coronavirus outbreak means times are bleak in the world of football at the moment.

All major European leagues have been suspended until further notice, the highly-anticipated 2020 European Championships have been pushed back by a year, clubs are letting go members of staff and no-one really knows when the next professional kick-off will take place.

Of course, this is not the first time that football has come to a standstill over a global crisis. As Europe and much of the rest of the world went to war between 1939 and 1945, the sport that everyone knew and loved came to a complete stop as players went off to war, communities were torn apart and cities came under threat from invasion.

FFT takes a look at how English football stopped, reformed itself and then got back to normal during the Second World War...

The suspension of the English leagues

As the only side with a 100% record that season, Blackpool – who have never won the title – sat top of the First Division following three wins from three, with the Seasiders closely followed by Sheffield United, Arsenal and Liverpool.

Charlton Athletic sat ahead of Manchester United in England’s top-flight, while Leeds United’s winless start to the 1939/40 campaign saw them at the foot of the table. Tottenham Hotspur and Manchester City were both sitting in mid-table obscurity in the Second Division.

Due to the cries demanding young men to join the army and head off to war, many people believed it would be the end of football for years to come.

In his autobiography, Football Is My Business, Everton striker Tommy Lawton said: “Then came the war and with it the end of my career - or so I felt.

“Surely there couldn't be room for a professional footballer in a world gone crazy? I, of course, being a young, fit man of approaching 20 would go into the services.

“Meanwhile, in the leisure time I had left I wound up my personal affairs, cursed Hitler and all his rats and occasionally sat down to think of what had been and what might have been."

Yet in and among the trying times and turmoil of war, football still had a role to play in everyday life.

The sport was deemed to be a positive influence on the morale of both soldiers and civilians and English football was temporarily reformed as a result.

There were, of course, limitations on how football would carry on, which caused some difficulties. The government imposed a 50-mile travelling limit and a spectator limit of 8,000 fans per match in order to protect public safety.

What this meant was that the top four divisions in English football were replaced by regional leagues, meaning clubs faced sides in close proximity to each other to reduce travel.

There were divisions in the north west, south west, north east, Midlands, east Midlands and west of England. Four equal-tiered southern divisions were set up to accommodate the many London clubs, while the FA Cup was scrapped and replaced with the Football League War Cup.

England’s international matches were scrapped too, instead playing unofficial wartime friendlies against the other British teams.

It wasn’t easy to stage football in wartime Britain, as stadiums were used as either army bases or were destroyed during air raids. Arsenal’s Highbury Stadium became an Air Raid Precautions centre so the Gunners ground shared with arch-rivals Tottenham Hotspur.

Yet football’s popularity continued to soar despite the doom and gloom of war. The limit on spectators was relaxed and over 60,000 fans attended the 1941 Football League War Cup final at Wembley despite Nazi bombers attacking London during the Blitz.

Hitler’s aerial attack on Britain did little to dampen the mood in the country with regards to football, as Winston Churchill lifted the country’s ban on Sunday football in order to keep morale high during the testing times.

It wasn't just the league format that faced significant reform to the war, but the player contract situation was overhauled too.

War records show that between 1939 and 1945, a total of 784 footballers joined the national war effort, including 91 from Wolverhampton Wanderers, 76 players from Liverpool and 65 from Huddersfield Town.

It left several clubs desperately short of players, so the FA abandoned the idea of player contracts and allowed clubs to bring in ‘guest players’ for particular matches. This meant players who joined the war effort could play for various clubs depending on where they were stationed in the army.

Lawton, who joined the British Army in early 1940, was stationed in Birkenhead so he could carry on playing for Everton. Yet the forward also featured for Leicester City, Greenock Morton, Chester City, Aldershot and Tranmere Rovers during wartime.

He added: “I was one of the fortunates who, by reason of my retention in this country on Army service, was able to get in my weekly game throughout the period of hostilities.

“And incidentally there was periodical hostility from people who thought it wrong that fit, able-bodied young fellows like myself should be playing football in England while their husbands, sons and sweethearts were fighting.

“The War Moguls ordered that I stayed in England to do my war job. Football was incidental, but in its way it too played a part.

“I appeared in hundreds of charity matches for England, the Army, combined services and unit sides. Let me make it clear. I didn't ask to stay in England.”

Midfielder Bill Shankly, who would go on to be deeply-rooted in Liverpool folklore as a legendary manager at Anfield, played wartime matches for Norwich, Arsenal, Luton and Partick Thistle, despite playing pre and post-war football for Preston North End. Shankly even turned out once for Liverpool in a 4-1 win over Everton at Anfield in May 1942.

Wartime football also allowed Jackie Milburn to make his career debut in the sport, making his Newcastle debut in 1943. The forward would go on to become one of England’s greatest ever strikers and finished his career at the Magpies’ record goalscorer with 200 career strikes.

Getting back to normal

Following Hitler’s death and Germany’s surrender in May 1945, the end of the war was greeted with the return of the FA Cup for the 1945/46 season. The regional leagues carried on for one more season with just a North and South division, before the traditional top-four division format returned for the 1946/47 season.

The war still had some effects on football even after it had concluded. Who could forget the story of Manchester City goalkeeper Bert Trautmann, who went from a former Nazi soldier ridiculed by his own supporters to FA Cup final hero in 1956.

The coronavirus outbreak has caused much change in our society in just a few weeks, but football and its community has proven that it can come back strong again from a global crisis.

STAYING IN? Here are the best football books to buy for self-isolation