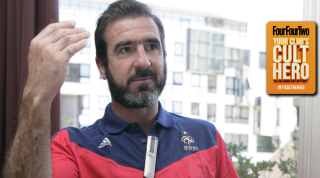 "Yes, he did tricks, but he was also a great keeper. I loved his energy, his excitement, his desire to take risks. He made mistakes, but he had a real spirit for the game. The Scorpion was against England, wasn’t it? He kept the ball out and that’s all that matters. I want entertainers in my team."

"He was a strong player, a real man. He played a big role in that great Brazil side from the 1982 World Cup – some say the greatest ever team not to win the tournament. He could defend, but he could be very good attacking too. I liked the way he expressed himself. He always seemed to enjoy his football."

"He was a leader of men, a dominant presence who could bring the ball out with grace and skill. But I tell you this: he broke my heart. As an eight-year-old, I watched the 1974 World Cup Final between West Germany and Holland and I was supporting the Dutch. I cried my eyes out when they lost. I was very sad, but now I understand all about the brilliance of the Kaiser."

#FFTCultHeroes Find out why Cantona got thhe Manchester United pick

"You have to have an Italian defender and there was no one better than Facchetti. I was too young to see him play live, but I saw highlights from the late-’60s and I instantly liked him. He was a noble player, hard and skilful. He scored a lot of goals for a full-back too."

"Do I need to say why? He was the best in midfield; he could play everywhere. He could play the holding role and be defensive, but then he could suddenly burst forward and score goals. He was so intelligent in how he played the game and let me tell you: it felt good to have him behind me for four seasons. He’d win the ball and then give it to me. And what a character! He’d lead my team and inspire them."

"A lot of people only remember his hair, but he was a wonderful footballer. We played together at Montpellier and it was an absolute pleasure. He is a shy and quiet man, but also has a strong character. Physically he wasn’t great, but he had such vision and could get the ball where he wanted. He was a very generous player, he never thought about himself."

"Some say Pele was the greatest player of all time, but not me. Maradona will always be the greatest. He won World Cup in 1986, narrowly lost in the final in 1990 and then in 1994 maybe would have won it again had he not been banned. The crucial difference with Pele is that Maradona wasn’t surrounded by great players; he had to carry the team himself. If you took Maradona out of Argentina they would not win the World Cup, but I think Brazil without Pele would still have won."

"Sadly I have only seen a few highlights of him in action, but he’s the kind of player I’d want in my team. He was a perfect footballer. The way people speak and write about him drew me to him. He is maybe hidden from us now, but if he played today he would be one of the best in the world. He had so much skill."

"I loved the Dutch in the ’70s, they excited me and Cruyff was the best. He was my childhood hero; I had a poster of him on my bedroom wall. He was a creator. He was at the heart of a revolution with his football. Ajax changed football and he was the leader of it all. If he wanted he could be the best player in any position on the pitch."

"Kempes is remembered for helping to win the World Cup with Argentina in 1978, but he was also great for Valencia in Spain. He could score goals, and importantly for me, he did it with such elegance. He was tall, so good in the air, and on the floor he was quick and clinical in front of goal."

"He was a free spirit and had such charisma. With George and the rest of these players, I am sure we would have a lot of fun on the team bus! He loved life, but when it came to the game he was always focused. He gave everything he had to win. Yes, he left Old Trafford early, but he started at a young age and left so many great memories."

"I was going to choose Cruyff as a player-manager because I loved his tactical brain. He was always thinking, he always wanted to improve his players. I know what his teams can do as I watched from the stands as his Barcelona side beat United 4-0 in 1994. But then I thought, 'I picked the team, so I should manage them'. I would love to take charge of this team. I know we would have some good times."

This feature originally appeared in the April 2006 issue of FourFourTwo. Subscribe!