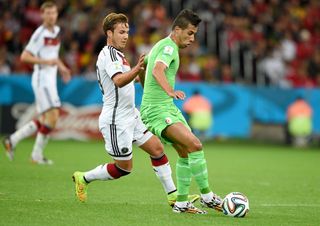 Saphir Taïder first made his name at Grenoble Foot 38 as an attacking midfielder, stepping in when Sofiane Feghouli jumped ship for greener pastures at Valencia.

Despite his good play, Grenoble were relegated in each of Taïder’s first two seasons. To exacerbate matters, the historic club were further penalised after declaring bankruptcy, dropping another division.

The disintegration instigated an exodus and Taïder, who had drawn interest from Spanish and Italian clubs, opted for a move abroad aged only 19. Fiorentina insisted, but he chose to sign for Bologna instead.

Once settled in northern Italy, more prestigious clubs quickly manifested their interest in the midfield dynamo. Last summer Inter Milan signed half of the player’s rights for €5.5 million, and under Walter Mazzarri, Taïder made 26 appearances from midfield.

But Inter have seemingly opted for a new route under different management, and with the signings of Gary Medel and Yann M’Vila, Taïder has looked elsewhere for playing time. Southampton seem willing to award him just that, signing him on a one-year loan deal.

Taïder is at a juncture in his career that could see him blossom from exciting prospect to superstar, and no greater stage exists for such a transformation than the Premier League. The Castres native is entering his fifth professional season, having played 104 matches in all competitions and participated in Algeria’s successful World Cup campaign.

His time in advanced areas of the pitch early in his career nurtured his creative capacities. Taïder’s pedigree as an attacking player is particularly valuable in that he has the ability to dribble past opponents or the creativity to pick out a through-ball.

But at Bologna, coach Stefano Pioli utilised Taïder’s industry and work-rate in a deeper position, transforming him into a central midfielder. The rebrand proved a masterstroke as the move immediately paid dividends.

The 22-year-old Algeria international is now the kind of player that will break up play in his own half and try to finish a move at the other end. Then he’ll do it again. He zips up and down the park at times a defensive midfielder, at others an auxiliary trequartista.

Taider’s biggest strength is his ubiquity on the pitch. The youngster contributes defensively, but is equally an offensive threat. He has also learned to masterfully dispatch indirect set-pieces and corner-kicks. His goals in the last two years have come either from delayed forays into the penalty box or daisy-cutters from great distances. Defensively Taïder is tough on his man, physically harassing opponents, but also nipping and tucking with intelligently timed interceptions.

An unwarranted result of Taïder’s defensive involvement is reckless tackling. He regularly commits unnecessary fouls, the majority of which are frustrating but innocuous clips.

Taïder’s end product on the offensive and defensive side of the ball can also be improved. For instance, it’s not uncommon to see him run the length of the pitch and fail to carry out a tackle. The same applies in the final third where he has missed his fair share of sitters.

Ronald Koeman has waxed lyrical about the multifaceted ability of his new midfielder. “He can play as a controlling midfielder, but he can also move up around the box and up front. That’s a good thing for a coach or manager because it brings more possibilities to the players in the team. He brings competition to the squad.”

However, the former Feyenoord manager is still undecided if Taïder will remain at St Mary's come May.

“He can still learn some things, so we will train him and develop him this season. Over the course of the year, we will then make a decision about the future of the player.”

Taider is one of several players who benefitted from a change in FIFA legislature to represent Algeria internationally. A former France youth international, Taider could have possibly played for three separate nations. Taider's older brother, Nabil, is a Tunisian international.

Saphir was touted to follow suit and join the Carthage Eagles in their bid to qualify for Brazil 2014, but Algeria Football Federation strongman Mohamed Raouraoua persuaded him to join in March 2013 after expanding on his 'sporting project'.

Taider steps into an already overcrowded midfield. Southampton have Jack Cork, Morgan Schneiderlin, Victor Wanyama and youngsters Harrison Reed and James Ward-Prowse in their ranks. This is where his versatility might come in handy. For instance, Mazzarri played Taider on the left of his 3-4-1-1 on occasions, and the Algerian did not look out of place.

A buffer period might prove necessary as Taïder had an extremely busy summer and does not speak English. However, he rejoins former club-mate and good friend Gaston Ramirez, who should help him adapt from Serie A. Taider’s industry and physical style of play should mean that it won’t be long before Saints supporters see him perform at full capacity.