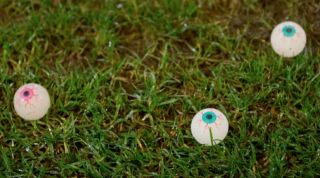 The incident happened on Tuesday when Dunfermline beat Falkirk 2-0 in the Scottish Championship.

Shiels had to have his right eye removed at the age of eight after an accident at his family home in Northern Ireland.

This isn't the first time the former Rangers man has been the subject of abuse – Falkirk players Joe McKee and Kevin O'Hara are still suspended after mocking the player when the two clubs faced each other in October.

Falkirk have vowed to take action against anyone who was involved.

The official club statement read: "Falkirk FC apologises unreservedly for the abhorrent behaviour of a small number of individuals.

"The club wholeheartedly condemns the abuse witnessed towards Dean Shiels in the strongest terms and will be working closely with Dunfermline Athletic FC to identify those responsible.

"Abuse towards anyone with a disability is simply unacceptable and the fact this took place with a sporting context with rivalries at play is no excuse.

"This needs to stop now. We will look to action against anyone identified from today's game and will not allow this disgraceful behaviour to be repeated."