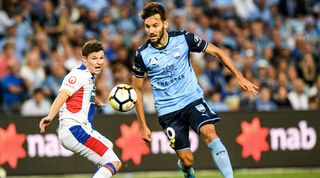 Ninkovic & Co. were trailing Newcastle after Andrew Nabbout had put the visitors ahead, but Sydney came back in some style thanks to their Serbian playmaker.

Just six minutes after Nabbout's opener, the 33-year-old picked up possession around 25 yards from goal before neatly skipping around a couple of players and cooly dinking the ball over sprawled goalkeeper Andrew Redmayne.

Ninkovic has been in sparkling form in the A-League this season, but hasn't played for Serbia since 2012 during his days at Dynamo Kiev. He appeared at the 2010 World Cup, and hasn't yet given up hope of a recall in time for the 2018 edition.

"I already played in a World Cup and of course I would like to play again, but now it’s really hard because I am here in Australia and I am 32 years old," he admitted recently. "It’s hard, but like I said, you never know. This is football and if you work hard and believe then anything is possible."