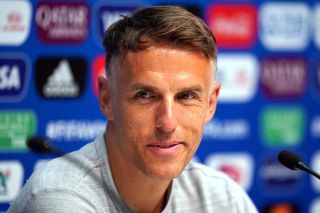 Phil Neville has guided England to the semi-finals of the Women’s World Cup - and Faye White has declared him a success as boss, regardless of what happens against favourites USA.

The Lionesses face the reigning champions in Lyon on Tuesday night, and USA are odds-on favourites to lift the World Cup after eliminating hosts France, having started the tournament with a 13-0 win over Thailand.

But England have looked strong on their way to the final four, winning all three of their group games before comfortable victories over Cameroon and Norway.

Faye White represented England 90 times between 1997 and 2012, captaining the side for a decade, and has been thoroughly impressed by the job that Phil Neville has done in his first major tournament as manager. Whatever happens in the rest of the tournament, she says that Neville has been a success since taking over last year.

“I do think that,” White tells FourFourTwo. “He’s done really well. He didn’t have a lot of knowledge about the women’s game before, but he’s brought his experience - what he’s learned from some amazing managers as well as the personal experiences from throughout his career.

“As a player, if I was sat in that dressing room, that would only fill me with confidence and excite me.

“He’s really dove into the women’s game, he’s wanted to learn a lot about it and the players. He’s also wanted to learn about the difference between managing women and men, because the environment he would have been in before is probably very different to what the England women’s changing room is like.

“It’s about how to get the best out of those players, and he seems to be doing that. Lots of what the players have said about him has been really positive.

“A big thing is the trust between him and the players. He’s allowed them to have freedom in their lifestyle, which is very different to when I was in the England team. When you were on camp, it was quite controlled.

“But I went out to the game against Scotland at the start of the World Cup, and I was in the team hotel. There was a very relaxed feel. They were allowed to go out and see family and friends in down time.

“It’s just that trust, giving the players that freedom and saying, ‘You can do what you’d do at home, but equally make sure you’re ready to perform’. He’s treated them like professionals, and that’s a good thing.”

For England’s semi-final against USA, Faye White is encouraging the nation to recreate the scenes of summer 2018 alongside pub chain Greene King