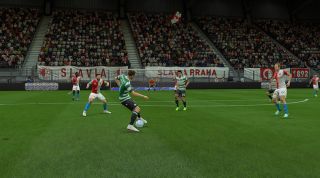 One of the best ways to be unpredictable on FIFA 19 is to gain mastery of multiple skill moves to keep your opponent guessing in the attacking third.

There’s a plethora of tricks on FIFA 19, many of which are only good for showing off (nothing wrong with that – Ed.), but considering how overpowered AI defending is this year, you’ll hardly have any time to showboat before you find yourself being counter-attacked.

Therefore, you’d do well to turn your focus towards the more simple, yet effective skill moves in FIFA 19. Here’s a look at seven of them...

Note:Directions depend on where your player is facing on the pitch.

How to perform: Press B or then A (Xbox)/Circle then X (PS4) and flick the left stick in opposite direction to where player is facing.

Skill rating: One star, so anybody can do it – even your goalkeeper.

The fake shot is one of the oldest skill moves on FIFA, but its effectiveness hasn’t waned – in fact, it’s more useful than ever before thanks to the speed boost it offers. There are three variations of the move on FIFA 19: the regular fake shot, the Cruyff Turn and the cut-in.

How to perform: Push your right analog stick (without holding it down) towards the direction you’re facing, then move in to the left and right in quick succession.

Stepovers were somewhat clunky on FIFA 18, but they’re a lot more fluid on this year’s iteration thanks to the new animations. They’re a great move to add to your repertoire as they allow you to change direction quickly, and are quite satisfying to watch when executed properly.

You can also combine them with advanced moves such as the rainbow flick, or even the new three-touch roulette.

The scoop turn (performed while standing)

How to perform: perform a fake shot and position your left analog stick diagonally.

If you want to dominate on FUT, you need to know how to perform the scoop turn: it’s a ridiculously overpowered skill move as a result of its short execution time. The scoop turn is best utilised when you’re backed into an opposition defender – it allows you to escape to either side of a player before he’s able to react, thus giving you space for a shot or a pass.

How to perform: Hold L1/LB, then flick your right analog stick towards where you want to exit (left or right).

Often utilised by Andres Iniesta and Angel Di Maria in real life to great effect, La Croqueta is one of the new yet most overpowered skill moves on FIFA 19. It allows you to find your way around defenders in 1 vs 1 situations by essentially changing your lane right in front of an opposing defender.

You have to time it right as its animation is a bit slow, hence performing it while you’re about to be tackled could result in you losing the ball. It’s satisfying to watch when done correctly, though, as it gives you ample space to run into while your opponent just stands and stares.

How to perform: Release the sprint button and perform a fake shot while directing your left analog stick towards your preferred exit direction (left or right).

Despite being one of the more underused skill moves in FIFA, the heel chop, like the fake shot, is one of the best moves you can use to escape a tackle and create space between you and your opponent. Unlike the fake shot, though, it doesn’t give you a speed boost; instead, it slows you down but creates enough space for you to take a shot or pass the ball to an open player.

How to perform: Flick the right analog stick towards where your player is facing, then flick it left or right depending on where you want to exit.

Popularised by Manchester United icon Dimitar Berbatov, the Berba spin is one of the most effective moves you can use on the flanks. It has been nerfed quite a bit since FIFA 17, but when executed properly it’s sure to help you get past multiple defenders by allowing you to completely change your direction while running.

How to perform: Flick the right analog stick behind your running direction and then towards where you want to exit (left or right).

The Giovinco tornado – or one-foot spin – is the trademark move of former Juve star Sebastian, who plies his trade for Toronto in MLS. The move allows your player to almost instantaneously change direction by turning with one foot, thus creating space for a shot or a run towards goal. It has to be executed in the right situation, though, else you might find yourself being laughed at by your opponent over a mic.

Unlike most skill moves, the situation matters more than the timing – so be sure to practise it before using it online.

RATED! The 10 most overpowered players on FIFA 19