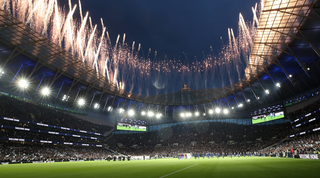 Fire has become a staple of the Premier League’s kick-off ceremony. Anyone who made it to a game before the lockdown will have noticed those little black boxes which now guard touchlines up and down the country. Some might even have lost an eyebrow to one of them.

There’s a cliched response to this. It’s something new, therefore we must hate it. It’s the kind of eye-rolling razzmatazz which will always be associated with American sports and which, when it’s imported into Britain, can’t help but to be toe-curlingly naff. It’s forced fun and, sorry America, we hate that. The fashionable reaction – naturally - is to groan and complain, and to mumble facetiously about how things aren’t how they used to be.

Such cynicism certainly has a point, because ‘ceremony’ has been on the march for a while and it didn’t just arrive with the Premier League. In his fruitless search for hearts and minds, Don Revie’s Leeds United used to kick plastic footballs into the crowd before games at Elland Road, and give away their sock tags.

Okay, Leeds United Calypso and smiley badges weren’t quite shooting towers of fire and EDM, but it shows that a certain impluse has always been there. Yes, there is something Spinal Tapish at work now and it’s incredibly easy to mock the disco setting that most clubs’ floodlights have been equipped with. As it is to sneer at the new tricks that those fire boxes have learnt over the past few years. They do all sorts now, in all kinds of different ways and directions.

The rebuttal, however, is to say that – actually - it’s alright that football isn’t entirely geared towards overweight men in their 50s. They can still chug their Bovril and pine for the days of a marching band and a half-time tug o’ war, but to look around the stands now is to see many more women, many more children and to recognise that the game is meant to be for everyone.

Traditionally, just the promise of actual football was enough to tempt people through the turnstiles, but now – not least because of escalating ticket prices and the many other, duelling forms of weekend entertainment – the game has to give a little more back and, crucially, to provide that something to a wider group of people. There has to be compromise.

Our own generations probably didn’t think in the same way. But you can imagine now, in 2020, a young boy or girl being taken to a game, watching two halves of middling football and not being enthralled. In fact, if they knew how much the ticket had cost, they’d probably ask their mother or father whether ‘that was it?’

Just after Christmas, I found myself walking the streets of a town in which I didn’t belong, many miles from home, listening to hard rock band Black Country Communion on my iPhone. Was there ever a more egregious case of cultural appropriation than that? Probably not, but it’s easy to explain how the band ear-wormed their way into my Spotify account: BCC are a part of the pre-game routine at Moulineux and, actually, it works. It really, really works. It’s affecting, in the sense it makes the prospect of live football incrementally more exciting.

Maybe because it helps to define Molineux as a place, not just a dot on the Premier League. Like hearing the local accents in that underpass on the way to the stadium, it's a little moment of difference and identity which frames the contest that you're about to watch.

It helps that Wolves are a good side. The club is extremely well-funded, have rocketed back into the Premier League and, as and when the season resumes, will again be on the cusp of achieving something tangible and significant. Some grounds are more world-weary than others and, clearly, Molineux should have more tolerance than most. It’s still strange, though, because while they too have fire and arguably the most decadent fireworks display in the league, it all fits together rather nicely. In fact, it’s something I find myself looking forward whenever a trip to the Black Country comes up.

Not more than the game itself - let's not get carried away - but just as a little bonus.

I know, I know, I must be excommunicated from the sport immediately, have my press pass confiscated and then be fired into the sun without further delay. Nevertheless, it does show that creeping modernity can be tolerable if it’s combined with enough tradition.

That’s the key at Wolves, because there isn’t the sense that anything is being replaced. One of the most common complaints at Wembley, for instance, is that generic pop music often drowns out organic crowd noise, or that moments of victory are tainted by the Black Eyed Peas or some other top 40 vacuity. It's always been bothersome that - for instance - the same song accompanies the trophy lift at all three Football League Playoff finals. For such a special occasional, it's strangely generic and token - and it's hard to feel the gravitas when it’s soundtracked by the post-midnight mood of a regional Wetherspoons.

By contrast, Molineux shakes to Led Zeppelin’s thunder and, later, when Glenn Hughes’ vocals crack in the air, there’s this overwhelming sense of authenticity. You are not at a venue to watch an event, but in a place where the football team is still tied to its community - and it feels good to be reminded of that, because it's not always the way. Sometimes, that balance between old and new swings too far the other way.

Hughes was born in the West Midlands – so too, famously, was Robert Plant – and their voices being matchday staples makes everything else not only easier to digest and tolerate, but also – importantly – appropriate. At the end of the team's recent 3-2 win over Tottenham, Plant could actually be found milling about in the media area after the game. He was there that day because he's a fan and a local. As with Hughes, that's what you think of when you hear his voice over the tannoy.

So this just needs some thought; that's really the only caveat.

When teams walk onto a pitch, the fire can throb and an immaculately choreographed firework display can burst in the sky, but the careful preservation of a core identity can still allow even the hardest heart to sing.

As long as nothing gets trampled. As long as Z-Cars still plays at Everton and Watford, and the Dave Clark Five continue to play Crystal Palace out at Selhurst Park. As long as, at Molineux, it remains okay for Hi Ho Silver Lining to run into the first few seconds of the match.

Then, it’s just rational appeasement. Nothing can stay as it was and there are many good reasons behind football’s evolution. However, there is a way to modernise without disenfranchising those who have allowed the game to arrive at this commercial apex. It’s not a difficult balance to find, either, because it amounts to nothing more than being mindful of symbolism and tradition, and remembering that clubs exist in places and amongst people.