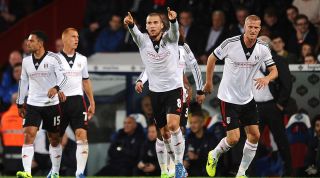 The first 10 minutes at Selhurst Park proved that stats don’t always tell the whole story. Fulham had 81% possession but did very little with it, Martin Jol’s men too content to play sideways passes that did little to threaten the Palace back four. Darren Bent was a passenger in those opening exchanges, only taking the kick-off and losing one aerial duel.

Despite completing 15 passes to Fulham’s 65 in the opening 10 minutes, Palace were the more direct and dangerous. Tricky left-winger Yannick Bolasie stoked the Eagles’ main fire of the evening, if you exclude the errant smoke alarm that forced Fulham owner Shahid Khan, among others, from the executive boxes in the Whitehorse Lane end for 10 minutes of the first half.

Credit should also go to Adrian Mariappa for out-jumping Brede Hangeland – to whom he concedes more than eight inches in height – for Palace’s seventh-minute opener, but that was as good as it got for the home side.

Impressive 10 days ago at Anfield, Palace's young Spaniard Jose Campana was overrun on Monday night. Neat enough in possession, it was defensively that the midfield creator struggled, contributing a solitary foul – no tackles, interceptions or headers – to the Eagles' rearguard in 45 minutes of action.

The talent's there, but without the ball, Holloway’s men were effectively playing with 10 men. Mile Jedinak can't do all the midfield donkey work alone.

The Selhurst Park press box is nestled in the corner of this tightly packed, old-school ground, just above the players’ tunnel. And there was no better place from which to admire in bewildered awe the pure quality of Patjim Kasami’s chest control and running right-foot volley into the far corner. As soon as the ball left the Swiss midfielder’s weaker side (it gets better, doesn’t it?), Palace keeper Julian Speroni had no chance.

After a slow start to the season, Fulham’s campaign had its kickstart.

4) Sidwell’s metamorphosis was a bit good

Kasami’s wasn’t the night’s only meaty volley. Steve Sidwell’s continued improvement from the footballer shell Fulham signed from Aston Villa in January 2011 was confirmed with the boyhood Palace fan’s own perfectly-executed long-distance finish just before half-time.

Watch it again and look at the Arsenal trainee’s standing leg. He’s up on his tip-toes, Rudolf Nureyev-style, ready to adjust his body position should the falling deflection from Bryan Ruiz’s free-kick not react as expected. Again, Speroni can only wave it into his net.

Brought up down the road in Croydon, the flame-haired 30-year-old completed 37 of 40 attempted passes – including an impressive five from five in the final third – and won seven from eight tackles in a complete midfield display.

That volley, though, was the highlight.

Yes, Bryan Ruiz got two corner assists against Palace and it was from his free-kick – struck into the wall – that the ball fell to Sidwell to volley home Fulham’s second, but the slippery Costa Rican was up to his fitful old tricks for much of the 90 minutes.

Playing from the right-wing position from which he had such Eredivisie success with Twente, Ruiz was rarely involved in what was an especially creative team selection from Jol: none of Ruiz, Kasami or Dimitar Berbatov lose much sleep over defending. One blocked shot, a handful of final-third passes and some admittedly well-delivered corners do not a top-class Premier League creator make.