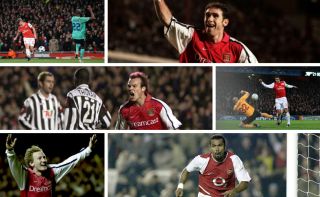 After two seasons of being picked apart by the likes of Andriy Shevchenko, Luis Figo and Gabriel Batistuta at adopted home Wembley, Arsenal finally saw sense and moved back to Highbury for their European nights in 2000.

N5 had still hosted European football the previous season, the Gunners heading home for a successful run to the UEFA Cup final, but September was the famous old ground’s first taste of the Champions League and witnessed an immediate return to form against the Ukrainian outfit.

That change in fortune was largely down to the fact that they weren’t facing the crème of the continent, rather a Shakhtar side making their first ever appearance at this level. Not that it showed.

The debutants led 2-0 inside 30 minutes, and despite Sylvain Wiltord’s goal late in the first half they led 2-1 until the 85th minute, thanks in no small part to an inspired if unorthodox performance from Yurii Virt in the visitors’ goal. Cue goalscoring hero Martin Keown, first with his chest from a corner and then a calm side-footed finish, to snatch victory in the final five minutes of a historic night at Highbury.

Dynamo Kiev's demise from the vintage side that almost reached the 1999 Champions League Final was bookended neatly by their visit to Highbury in November 2003.

Four years earlier a side led by Shevchenko had torn Arsenal to shreds in the freezing cold mud of Kiev’s Olympic Stadium en route to the semi-finals, but on this autumn evening in north London they battled manfully in pursuit of the draw they hoped would sneak them into a UEFA Cup berth.

RECOMMENDED 10 of the biggest Champions League shocks: Arsenal on both ends, Sheva the assassin

Even against meek Dynamo, Arsenal laboured. Knowing that nothing less than a win would suffice after a catastrophic start to the European season in which they were the last of the tournament’s 32 sides to score, it took a diving header in the 88th minute from Ashley Cole to bring the Gunners to life.

It was the kind of moment where time slows to a crawl, as Thierry Henry flicked on and Cole stooped to rescue Arsenal with the Highbury clock silently ticking towards Champions League oblivion. The reverberations kept N5 rocking long into the night.

There was a tragic heroism about Arsenal’s exit from the Champions League to the Rossoneri in 2012, but in the end it speaks volumes of the club’s withering European pedigree that one of their most glorious nights since moving to their new 60,000-capacity Emirates Stadium home ended ultimately in defeat.

Not that anyone who had turned up at the ground that night expected to see anything other than a damage limitation exercise, after the debacle in Milan two weeks earlier had left everyone reminding Arsene Wenger that no side in Champions League history had overturned a 4-0 first-leg deficit.

That record survived, but Milan scarcely knew how. Arsenal ran riot in a blitzkrieg first 45 minutes, netting three times and missing a glorious chance for No.4 just before half-time, teeing up a second half which seemed to crystallise into one extended moment of knife-edge tension. The Gunners showed such courage in defeat that it would have felt almost vulgar to have completed the comeback.

At 8:50pm on April 4, 2001, English football in Europe exploded into life. Two goals for Leeds United at home to Deportivo La Coruna set them on cruise control towards the Champions League semi-finals, while 170 miles south in north London, Ray Parlour thrashed the ball into the top corner against Valencia just two minutes after Thierry Henry had cancelled out Roberto Ayala’s first-half strike for the Spaniards.

Inside Highbury alone it provided the kind of energy burst that could carry a side to heady heights, the first time the ground had experienced the knockout stages of the Champions League.

It came after Arsenal had squeaked through in an unforgettable finale to the second group stage, a dramatic draw in Moscow between Spartak and Lyon carrying them through while they lost 1-0 at Bayern Munich, and which made the manner of their exit to Valencia even more agonising.

The Gunners were dispatched on away goals in the second leg in the Mestalla, where Leeds would famously fall short in the semi-final, but it didn’t stop Highbury from celebrating in raptures on that April night.

It was one of those perfect European nights that seemed to have everything when Marcello Lippi's Juventus visited Highbury in December 2001.

After defeat at Deportivo La Coruna in the opening match of the second group stage, Arsenal were facing a long cold winter in Europe, and needed a win against the Old Lady to provide some lingering warmth during the mid-season recess.

Early nerves were settled when Thierry Henry and Freddie Ljungberg put the Gunners two up at the break, but David Trezeguet jangled them early in the second half when he pounced on a Stuart Taylor blunder in the Arsenal goal. It was a nerve-shredding 40 minutes that followed, before Highbury was treated to one of its most memorable European goals: Dennis Bergkamp conjuring up something exquisite to set up Ljungberg for his second and light the fire beneath Arsenal’s season.

Even as Arsenal left the pitch amid deafening celebrations, there was an uneasy feeling that 2-1 at home to Barcelona might not be enough. February 2011 was the second season in a row that Wenger’s side had come up against the Catalans at the last 16 stage, and it was to be their second exit.

But in the six years that they’ve gone out at this stage, this was the only year that they went into the second leg with a lead, and it was as hard-earned as it was deserved, with Andrei Arshavin offering a rare reminder of why he was once the club’s record signing with a breakaway goal eight minutes from the end.