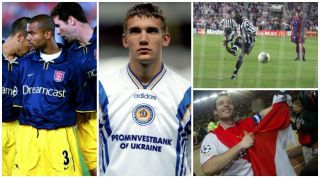 In 1997, Europe’s top competition broke with 40 years of tradition and ceased to be exclusively the fare of champions. Eight league runners-up from Europe’s strongest leagues were admitted to pit themselves against the continent’s best, and the ‘Champions’ League became a nominal homage to a simpler time.

Newacstle were pipped to the post by Sporting CP as the first non-champions to score in the competition, but more remarkable was the Faustino Asprilla hat-trick inside 49 minutes that lit the touch paper for a famous and unlikely win against old hands Barcelona. Late goals from Luis Enrique and Luis Figo weren't enough to deny the Magpies a famous win.

Unless current boss Alyaksandr Khatskevich has something remarkable up his sleeve this season, 1998/99 was the closest Kiev are ever likely to get to lifting Europe’s greatest prize.

On their spectacular run to the semis they racked-up a handful of worthy scalps, but the way in which they saw off holders Madrid in the quarter-final showed Valeriy Lobanovskiy’s tactical prowess at its best. Andriy Shevchenko was again the marksman on cue to crush los Blancos, but this was a team whose gears turned seamlessly throughout.

Everything is context as far as Milan’s sorry collapse at the hands of Deportivo La Coruna in the 2004 quarter-finals is concerned.

The Italians had danced to a 4-1 win at San Siro in the first leg, and travelled to Galicia safe in the knowledge that no side had ever overturned a three-goal aggregate deficit in Europe’s top competition. Amid such hubris, however, are Champions League dreams turned to ashes: Milan were pelted 4-0 at La Riazor (having smashed the same opposition by the same scoreline on the same ground the previous season) and skulked home wondering what had hit them.

Arsenal have been no strangers to opening-day defeat in Europe. In 2001 it was Champions League newcomers Real Mallorca who condemned the Gunners to a torrid start, after Ashley Cole’s clumsy challenge on Albert Luque led to a dismissal, penalty and mountain to climb.

Things got worse for Arsene Wenger when his side lost in Athens to Panathinaikos the following month, and only by virtue of a 3-1 win over the Spaniards at Highbury in December did they squeak through from a less-than-arduous first group stage. They didn't make it past the second, though, bowing out with Juventus behind Bayer Leverkusen and Deportivo.

Celtic Park is famed for its raucous Champions League nights, but this incredible result produced the mother of all atmospheres as Neil Lennon’s side sent Lionel Messi & Co. packing – famously, with a competition record low of just 16.4% possession.

Tony Watt’s legendary goal, which put Celtic 2-0 up, came between Victor Wanyama’s opener and a consolation from Messi. Barça had won the competition twice in the previous four years, but went down in Glasgow despite fielding the likes of Dani Alves, Xavi, Andres Iniesta, Javier Mascherano, Alexis Sanchez and Messi.

The win helped Lennon's men reach the last 16 – the last time they made it to the knockout stage – but their run was ended there by Juventus in a 5-0 aggregate defeat. Worth it, though.

When Barcelona were drawn alongside Dynamo Kiev for the 1997 group stage, Europe sat bolt upright and took notice. Ukrainian legend Lobanovskiy had assembled a Kiev side not only to match the great Soviet teams that had swept up a record 13 league titles in the former USSR, but that were making furtive eyes at the European Cup itself.

When Kiev beat Barça 3-0 at the Olympic Stadium in October, an upset at the Camp Nou didn’t feel so fanciful – but even in their most restless nightmares, Louis van Gaal’s team couldn’t have expected the tonking that was to follow. Shevchenko hit a first-half hat-trick as Lobanovskiy watched his side canter to a 4-0 win.

The shock from Manchester United’s 1-0 defeat at the Stade de France to little-fancied Lille in 2005 wasn’t fully absorbed until the final group standings were totted up, when the Red Devils were rooted to the bottom and facing a humiliating exit.

Astonishingly it was the only goal that Lille managed in their six games, yet they still managed to finish above United and parachute into the UEFA Cup. If it’s not your year...

There was a delicious symmetry about Bayern’s heartbreaking European campaign in 1998/99. While Ole Gunnar Solskjaer’s last-gasp winner for Manchester United still gets hearts racing in Salford and beyond two decades later, in Copenhagen it’s the memory of an equally stunning fightback on Matchday One that burns brightest.

The game had looked all up for Brondby when Markus Babbel struck 15 minutes from time, but goals in the 88th and 89th minutes for the Danes (the second a stunning individual effort from Allan Ravn) floored the Bavarians and dealt Alex Ferguson a handy blueprint for later in the season.

The autumn of 2003 was a something of an insoluble problem in the mind of Arsene Wenger. As his side brushed all aside domestically at the start of 49 searing unbeaten matches, their European opponents weren't proving so forgiving.

Inter came to Highbury and waltzed to a 3-0 win, Lokomotiv Moscow held the Gunners to a goalless draw, then Dynamo Kiev took advantage of some erratic Jens Lehmann hijinks near the centre circle to swipe a 2-1 result and leave Wenger's men bottom.

When Ashley Cole scored a late winner against Kiev at Highbury, however, Arsenal were shaken into life. Five goals on a must-win night at the Giuseppe Meazza in November brought Europe to a standstill – and the Gunners to the last 16.

FEATURE Five club heroes who roughed up their old teams

The sour side of being a European giant is that you often find yourself on the receiving end of devastating upsets. And for Real Madrid, they don’t come much more devastating than the 3-1 quarter-final defeat to Monaco in 2005 which derailed them from what looked a simple route towards a 10th European crown.

Madrid had led 5-2 one minute before half-time of the second leg before Monaco launched the unlikeliest of assaults, helped by former Bernabeu favourite Fernando Morientes – on loan in the principality from Madrid. Ludovic Giuly bagged one of his two goals before the break, and added another after Morientes had fired in against his old club just after the interval.

Monaco's two away goals in the 4-2 first-leg reverse separated the two sides who ended 5-5 on aggregate, ensuring a memorable night at the Stade Louis II as the Ligue 1 club dumped out the competition's most successful side.