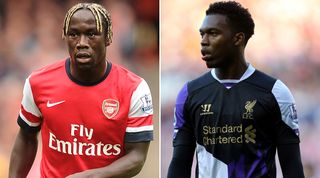 Despite their equally impressive starts, no one is really taking Arsenal and Liverpool seriously. Their current league positions are seen more as lustful flings than long-term love affairs: fun while they last but destined to go nowhere. But for all their doubters, they are where they are – first and third respectively – ahead of the more fancied Manchester clubs and, in Arsenal's case, Chelsea too.

The more neurotic of observers will have flagged up the cracks in Arsenal’s credentials already, after the Gunners suffered their second defeat in three games. In reality they were unlucky to lose at home to Borussia Dortmund in the Champions League, and Tuesday night’s defeat against Chelsea in the Capital One Cup proved little as Arsene Wenger fielded a weakened side.

The result had no direct impact on the Premier League, but it did highlight two factors that may prove significant come the end of the season: Arsenal’s fringe players are on the fringes for a reason – they’re not very good. Chelsea, however, have a formidable set of players in reserve, all ready to fight for the cause.

Sandwiched in between these two defeats was a 2-0 win at Selhurst Park against Crystal Palace. Arsenal were labouring to a 1-0 win when captain and goalscorer Mikel Arteta got sent off, but the Gunners showed resilience and went on to win the game 2-0. The storyline switched from a lacklustre display to a show of defiance.

After Liverpool were knocked out of the League Cup by Manchester United, Brendan Rodgers was able to rest his players ahead of Saturday’s showdown in north London. His players spent the week feeding off their 4-1 demolition of West Bromwich Albion.

A fully charged SAS strikeforce will give Laurent Koscielny and Per Mertesacker a few more problems than Marouane Chamakh managed last week. The Moroccan has netted just a single goal in the Premier League this season. Between them, Daniel Sturridge and Luis Suarez have struck 14 times.

The pair will bring a frightening set of weapons to the Emirates – pace, trickery, movement, an eye for goal and an expertise in the dark arts (no points for guessing who brings that to the table).

More worryingly for Arsenal, they will be without the services of midfield spoiler Mathieu Flamini, who is out for 2-3 weeks with a groin injury and would have played a key role in stifling the influence of Liverpool skipper Steven Gerrard.

There will be great match-ups across the pitch come 5.30pm. The team that wins the most individual battles will claim the points.

Who would have thought Flamini’s absence would have a debilitating effect? When he signed Arsenal fans groaned, criticising the club’s lack of ambition. But his destructive performances in the centre of midfield have highlighted his importance to the team. He won’t be there to protect the defence on Saturday after he pulled his groin against Palace.

Another injury concern is Serge Gnabry – the talented teenager is trying to shake off an ankle injury to make himself available for selection.

Rodgers will welcome the return of Liverpool’s playmaker Philippe Coutinho with open arms, with the Brazilian on course to recover from his shoulder injury. It’s unlikely he’ll be thrown in from the start, but he could come on and make an impact from the bench.

You can see the clichéd, Halloween-themed headline now: “Suarez comes back to haunt Arsenal.”

As unpredictable as football is, you just know the man the Gunners tried to sign in the summer for £40,000,000 and 1p will influence the outcome of this game. If he’s read the Sky Sports script it will be a dramatic winner. Cue a kiss to the wrist, followed by a kiss to the badge.

Because of Suarez’s mobility and quick feet, it’s unlikely Wenger will match 6ft 6in Mertesacker against him. It makes sense for the more agile Koscielny to take up the task, but if the Frenchman wants to get any sleep before Saturday, he should avoid the Liverpool-West Brom game tape.

Putting his hat-trick of great goals to one side, Suarez was a livewire. Only Jordan Henderson and Stephane Sessegnon made more passes in the attacking third. He tried more take-ons than any other player (11), skipping away from would-be tacklers five times. He also found time to create three goalscoring opportunities for his team-mates. Not a bad afternoon’s work.

Koscielny will have his work cut out, but he has the qualities to keep Suarez quiet. The defender’s performance in the 2-1 win away at Swansea in September is a perfect example of what he’s capable of. Against the Welsh side he made three successful interceptions, clearances and ball recoveries, and two blocks. Whatever they threw at him, he dealt with.

On Saturday a Uruguayan No.7 will come violently swirling into his territory. Will he be able to deal with this force of nature? Be warned, though – he does bite.

Both managers have the firepower to gun each other down, but who will get it right tactically on the day?

If Wenger sticks to his 4-2-3-1 formation, Olivier Giroud will find himself up against a powerful back three of Kolo Toure, Mamadou Sakho and Martin Skrtel. Without sufficient support from the advanced midfield three he’ll find himself isolated.

But the Gunners’ attacking trio can’t over commit going forward – against Rodgers’ 3-5-2 they’ll have to get back and support the holding midfielders and full-backs, who will have Aly Cissokho and Glen Johnson bombing forward. In the absence of Flamini’s defensive instincts, Wenger will need a disciplined and combative display from his holding midfielders.

Arteta reads the game well and treats the ball like a family heirloom, but he’s not defensive by nature. Aaron Ramsey or Jack Wilshere will partner him in front of the back four – they’ll need to provide the bite and get on Suarez when he comes to get the ball off the midfield.

Two footballing sides, two different approaches. There can be only one winner… unless they draw of course.