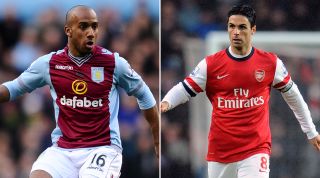 The Premier League match Paul Lambert could do without.

Aston Villa have a dismal home record - they've lost 15 of their 28 league matches at Villa Park since the start of last season, winning just seven. Arsenal have a the best away record in the Premier League this season, picking up 22 points from a possible 30 on the road, scoring 21 goals in the process.

The Gunners also have an enviable record at Villa Park, winning seven of the last 14 meetings in the West Midlands. In fact, Arsenal are unbeaten away to Aston Villa in just over 15 years. To highlight how long it's been, the last Villa boss to get the better of Arsene Wenger at Villa Park was John Gregory. John Gregory.

Villa have at least managed to win a few matches in North London in recent years, including on the opening day of this very season. But that 3-1 victory at the Emirates Stadium seems a lifetime ago now, with Villa failing to use that surprise success as a springboard, and Arsenal only twice since suffering defeat in the league.

All this tends to suggest Monday evening's match could and should be as much of a formality for the Gunners as you'll find in a Premier League away fixture. Put simply, this is the kind of match Arsenal have to win if they are to be picking up league winners’ medals come May.

If the Premier League table was determined by the tone of newspaper headlines, Villa would be at the polar opposite end to the table-topping Gunners, yet in reality they sit in the relative comfort of 11th.

However it’s what comes next that is leaving the fans most concerned – after this meeting with the leaders, comes a trip to free-scoring Liverpool, with matches against Everton, Newcastle, Man City, Chelsea and Man United (no sniggering) in the 10 games after that.

Only if they come out of the other end of that run in a similar position can they really begin to feel satisfied.

Villa will be without striker Libor Kozak for the rest of the season, with the Czech suffering a broken leg in training last week. He'll join Jores Okore (knee) on the sidelines until the summer. Paul Lambert hopes to have Dutchman Ron Vlaar back from a calf injury to bolster his defence.

Wenger will, of course, be unable to call upon Theo Walcott for the remainder of the season thanks to the knee injury he sustained in the FA Cup win over Spurs. He'll also be without Nicklas Bendtner (ankle) and Aaron Ramsey (thigh), though Olivier Giroud and Mesut Ozil are likely to return to the starting XI.

If Aston Villa are to have any chance of getting something from Monday evening’s match, they’ll need to succeed where Tottenham failed against the Gunners on Saturday and maintain some control in the midfield.

Key to that will be Fabian Delph, one of Villa’s star performers this season. In the reverse fixture, Delph achieved the rare combination of attempting 6 tackles (3 successful) and 10 take-ons (6 successful), as well as 13 ball recoveries. This underlines his value on both the defensive and attacking side.

Despite all the big-name playmakers shoe-horned into the Arsenal line-up, it’s still Mikel Arteta who keeps the Gunners ticking over. The Spaniard completed 89 passes in the recent win over Cardiff – a staggering 32 more than any other player on the pitch. A total of 23 of those passes were in the attacking third – so it wasn’t all just short, sideways passing on the halfway line.

If Delph and co. can knock Arteta out of his stride, Villa might just have half a chance. If. Might. Half a chance.

Monday evening's fixture will be the sixth dugout duel between Paul Lambert and Arsene Wenger. The under-pressure Scot's August victory in N5 was his first over the Frenchman, who has beaten the former Norwich boss twice, with the remaining two matches ending all square.

A shock win for the struggling Midla....no, only joking. 2-0 Arsenal.