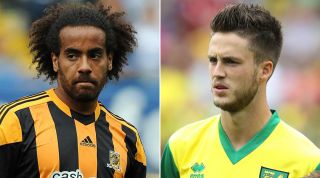 Meeting for the first time at the top level, neither of these clubs would be too proud to admit that 40 points is the first target – and both managers may have focused on this fixture, rather than their difficult opening games, as the more likely source of a first win.

At Chelsea, Steve Bruce's side worked hard in vain – no team in last weekend's Premier League blocked more shots, but then the Blues did fire in 23 efforts on impressive newbie Allan McGregor's goal – and many suspected that Jose Mourinho's men took their foot off the gas once they were in a 2-0 lead. But as Bruce acknowledged at Stamford Bridge, Hull won't survive by winning at Chelsea or Man City – their next destination: "No disrespect to Norwich, but we have to pick up points against teams like them."

The Canaries also allowed last weekend's opponents 20 efforts at goal, and Everton would have been peeved that Norwich gained a somewhat fortuitous point through debutant Ricky van Wolfswinkel's equaliser. Having scored a miserly 41 goals last term, the Canaries are collecting strikers – Van Wolfswinkel and injured Gary Hooper look set to be joined by Galatasaray's former Bolton forward Johan Elmander – and they will hope to manage more shots on target than the mere two they managed against the Toffees, as well as a much higher possession rate than last weekend's 34.7%.

Norwich would love to deploy new striker Hooper against a side who sought to sign him, but his shin injury may not clear up in time. Hughton has warned against burning out impressive debutant Nathan Redmond, but the England Under-21 man may not be rested yet.

Hull may opt to start with recent midfield captures Tom Huddlestone and Jake Livermore, who both emerged from the bench on the hour at Chelsea – but it remains to be seen what exactly Bruce's first-choice side is as he juggles his 10 summer signings.

Norwich scored a league-high 32% of their goals last season via headers, but Grant Holt is gone and despite Van Wolfswinkel's nodded equaliser, the new No.9 is a different type of player: against Everton he lost nine of his 11 aerial duels and managed just seven passes, including a kick-off.

Hull's Curtis Davies will hope to keep Van Wolfswinkel out after an encouraging opening game at Chelsea, in which the centre-back mixed diligence – he won eight out of 10 aerial duels and made seven clearances – with decent distribution, completing 33 of 39 passes.

Having earned financial backing with last season's 11th-placed finish, Chris Hughton has spent something like £25m to kick Norwich on. That might cause a pang of envy in Bruce, whose own £15m summer shopping means he now has to sell before he can buy, risks losing out to second-tier side Reading on the £1m signing of his former Sunderland purchase David Vaughan. But Hughton has made Bruce wince before, when his Newcastle side hammered Bruce's Sunderland 5-1 at St James's in October 2010 – although Hughton was out within six weeks, while Bruce lasted another year.

Home advantage to help Hull trump a team in transmission, 2-1.