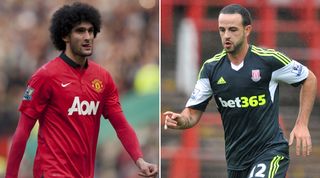 It may not have felt like it on Tuesday, but Sir Alex Ferguson's autobiography may have given Manchester United a sly boost by resurrecting his beloved siege mentality. The only current player to come under quoteworthy criticism, Wayne Rooney, has merely reaffirmed his allegiance to David Moyes – a manager many doomsayers predicted he wouldn't work well with – and once more the Old Trafford gates clang shut to outsiders.

Rooney went on to inspire a narrow but important defeat of Real Sociedad, and few would doubt he could do the same against struggling Stoke; with Norwich (in the League Cup), Fulham and Sociedad up next, United could build a fair head of steam before meeting Arsenal. Crisis? What crisis?

Three little points but eight huge places below Moyes, Mark Hughes has a similar job on: changing the attitudes of a club dominated by its previous manager. At least it's a change that most fans and players wanted, but Stoke wouldn't have chosen to be 16th, just a point above the relegation zone.

Moreover, if fellow strugglers Crystal Palace appoint Tony Pulis, Hughes's job could get tougher in the table as well as in hearts and minds. A first win at Old Trafford since 1976 would help - it would take Stoke level with United in the table, for a start - but the Potters have only scored one goal in their six league games since August. Can Hughes, the former goalscoring darling of Old Trafford, find a hero?

Moyes's changes against Sociedad would have been much bigger news but for Fergie's book – and of course that win: losing managers tinker, victors rotate. As it is, Moyes can call on the rested Nani, Marouane Fellaini, Adnan Januzaj and Robin van Persie, providing the latter's toes feel better (he's scored eight in seven against Stoke).

Stoke, for their part, hope Geoff Cameron can get over his gammy leg. Otherwise, they're fighting fit.

Dropped, rested, rotated: whatever the verb, Moyes' big summer signing was sidelined against Real Sociedad in favour of 39-year-old Ryan Giggs. He'll have a point to prove against Stoke, who combine the defensive muscularity Fellaini enjoys facing with the weak attacking which might allow him to drive forward. And despite expressing a preference for playing in defensive midfield, he still needs to get around the pitch.

Although three of Fellaini's four league appearances for United have been at home, he has yet to impress himself in the final third: against Southampton, he only received two passes there - and got a shot away from one of them. Even compared to fellow "sitter" Michael Carrick, Fellaini has been remarkably static: of his 47 completed passes against the Saints, 34 (72%) were in the middle third, compared to 20 of Carrick's 47 (42%). Moyes must demand the Belgian gets out more.

It seems a long time since Mark Hughes was the latest Next United Manager – and indeed it is. The pair clashed over Manchester City's 2009 pursuit of Joleon Lescott, but things have settled somewhat since, generally in Moyes's favour: Hughes has won just two of the 14 Premier League games between the gaffers, and only once since March 2005, when Jonathan Stead scored Blackburn's winner past Nigel Martyn. Likesay, it seems a long time ago.

Hughes would love a win, a goal or evidence of hope, but Moyes is likelier to be happy with a clean sheet home win, quietly down the Match of the Day running order. 2-0.