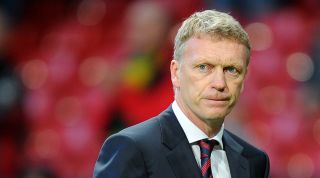 1) When failure's not a big story

An unavoidably busy Saturday brought the opportunity to pull the old Likely Lads trick: avoid the scores and watch Match of the Day as a beguiled innocent. But whereas in the days of Bob and Terry you got one or two pre-picked matches and liked it or lumped it, the modern MotD is edited in the evening to give preference to the day's big stories, and is all the better for it.

Still, it allows for educated guesses: when Manchester United rolled into view down in fourth slot - after a hardly unexpected, if aesthetically impressive, Arsenal home win over a side in the drop zone - the internal analyst assumed they'd got past Southampton without much panic or panache. So the Saints' late equaliser came as something of a shock. But was it, really?

Southampton started the day in fourth place, five above their hosts, and went into the game in much better form and spirit than their hosts. David Moyes - notably absent from the highlights edit, although his predecessor was filmed reposing up in the gods - would presumably love to be afforded the respect given to Mauricio Pochettino, who is looking to establish the Saints in the top eight just as Moyes had done with Everton. But at Old Trafford the expectations are considerably higher.

For the sake of the club, they may have to be lowered. Although Ferguson's final title win was a fine riposte to the neighbours, he hardly left Moyes a vintage squad, and the first team is clearly in transition. A poll of the MotD viewers - possibly weighted by Anyone But Uniteds, but hey-ho - strongly predicted Man United to finish outside the top four; United fans may soon be reminded of Oscar Wilde's note that the only thing worse than being talked about is not being talked about. And if fourth is the best the club can hope for this season, would they take it? (GP)

OK, so the Spaniard bagged Tottenham's second goal in their 2-0 win over Aston Villa on Sunday. Fair enough.

But it's quite possible Andre Villas-Boas will be locked in a dark video room with his coaches this week, trying to work out how his side can involve Spurs's summer signing like the striker's old side, Valencia.

Soldado's goal was his first in open play in the Premier League this season, and epitomised the type of net-rippler Spurs fans dreamed of the Spaniard netting on regular basis this season. The visitors' passing was incisive and deadly, played quickly through the motions from wide eventually through to Soldado's territory: Holtby to Paulinho, to Soldado, to goal - deadly.

The hitman's lack of involvement has been noted before, but it should come as little surprise given the nature of his goal-getting exploits in La Liga. Soldado is a poacher who relies on service, which is why Villas-Boas' decision to pick Gylfi Sigurdsson over Christian Eriksen was perhaps a little surprising. While the Iceland international has netted three times this season, his creative nous doesn't quite live up to that of his young Danish team-mate's.

Importantly, Spurs must show a little more urgency in the final third if they're to help Soldado as their lone man. Their build-up play was often laboured and lacking pace against Villa, whle Lewis Holtby was not invovled regularly enough making his first league start of the campaign. It was no surprise to see Spurs' second goal arrive as a result of both his and Paulinho's (who rarely ventured out of his own half, as seen below) involvement going forward.

In the coming weeks it wouldn't be surprise to see Soldado add to his tally, though. With Sandro back - a grossly underrated figure in the Spurs engine room - it should allow the team's creative cogs to play closer to the Spaniard, who in turn should reap the rewards. Don't forget we're yet to really see what Erik Lamela can do, too. (JB)

3) Stoke's striking woes are a horror for Hughes

Mark Hughes' Stoke project was never going to be an overnight success now, was it? Nonetheless, the former Blackburn and Manchester City chief will hope his side's fortunes are transformed for the better sooner rather than later.

Hughes' shift in culture at a club still maligned for its ugly past is, understandably, taking its time to prevail. But while the Welshman's changes are focused on making the Potters a more refined force on the pitch, the Staffordshire outfit are still suffering the same ailments as before. Defensively they are sound - how could they not be with Robert Huth and Ryan Shawcross calling the shots? - but up front there's a gaping void begging to be filled.

On Saturday Hughes didn't even bother playing a striker, instead electing for summer signing Marko Arnautovic as a false No.9. The young Austrian, however, predominantly hugged the right side where he was most accustomed to playing for Werder Bremen in the Bundesliga last season. As such, opportunities were few and far between, and West Brom should have walked away from the Britannia Stadium with all three points.

"We are struggling for goals but that's been prevalent here before I came, it’s something that we're working on," said Hughes. "I think in terms of chances created, we are still creating the same if not more chances [than before] given the fact that we are playing in a slightly different way."

Simply, Hughes is likely regretting his decision not to bring in a recognised striker over the summer. This season Kenwyne Jones has been the man handed the starts (four of them), but the beanpole striker is yet to find the net. Last season Peter Crouch was Pulis' go-to man at the sharp end, although just seven goals from 28 starts hardly made the Premier League sit up and applaud the former England man. This season the 32-year-old has started just twice, and is also yet to score.

Arnautovic, while an intriguing talent along the forward line, is clearly not the answer as a goalscoring force. Neither is Jon Walters. And that's worrying for Hughes, whose well-intentioned plans could be ruined if things don't pick up in front of goal soon. How Stoke would love a striker as good as Hughes in his prime. (JB)