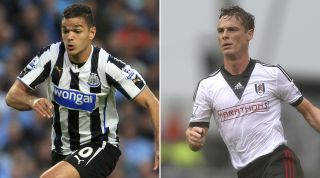 A Toon side hapless at the sharp end host bottom-half sleepers lacking spark.

If you haven’t yet guffawed at the hilarity of Newcastle’s shooting against West Ham last weekend (see this) it’ll tell you all you need to know about Alan Pardew’s side’s woes over the last 12 months. Sure, there’s Papiss Cisse who can generally be relied upon up front, but the Magpies haven't replaced Demba Ba adequately since his January departure to Chelsea.

Loic Remy could at least make his debut after sitting out the opening two games, and that’s particularly good news for Pardew, who may have woken up in a cold sweat this week thinking about Yoan Gouffran’s late miss against the Hammers.

Then there’s the injuries (more on that soon), six of which are to first-team players. Last season’s issues aren’t going away just yet.

It’s not much better for Fulham though, who scraped through their midweek Capital One Cup tie against Burton Albion on penalties despite fielding an almost full-strength side against the League Two side. Martin Jol’s men were comfortably undone by Arsenal at Craven Cottage last weekend, but there was at least a debut goal – typically poached – by new man Darren Bent. On paper the former England man and Dimitar Berbatov should make for an exciting Premier League strike force. Only time well tell, but something still just doesn’t feel quite right about the west Londoners.

Will it ever get better for Newcastle? It’s not quite as bad as last season but Pardew would rather enjoy the services of Ryan Taylor, Massadio Haidara (both knee), Jonas Gutierrez (hamstring) and Mike Williamson (knock). Cheik Tiote (groin) and Remy (calf), however, could feature after recent problems.

For Fulham, there could be a debut for interestingly-named centre-back Fernando Amorebieta, if he can recover from a knock in time. But Maarten Stekelenburg (shoulder) and Kieran Richardson (hamstring) will be absent, leaving David Stockdale and John Arne Riise to deputise once again.

Having spent around four months of last season sidelined,  the France international is understandably keen to make up for lost time. Undoubtedly Newcastle’s greatest creative threat, the 26-year-old is deployed wide right by Pardew with licence to cut inside and help out Cisse and Yoan Gouffran up front.

But the Magpies’ creative hub must learn that patience is a virtue. Against West Ham he was the game’s most wasteful player in front of goal, firing five off-target efforts, all from outside the box. Against Manchester City in Newcastle's season opener it was a similar story.

On the plus side, Ben Arfa’s passing stats so far this season make for more impressive reading. With 93% accuracy the Frenchman is excelling in that department, while his five completed take-ons in each game were both match highs. With that, he's also the Premier League's joint-top dribbler with Norwich wide man Nathan Redmond.

Getting it right against Fulham could be key to the hosts’ chances of victory.

They’ve faced off on eight occasions with five different clubs (Pardew at West Ham, Charlton and Newcastle; Jol with Tottenham and Fulham) – but only drawn once.

Jol has taken four wins to Pardew’s three, not least thanks to the Dutchman’s relatively successful days with Spurs. Pardew, on the other hand, took the reins at Charlton shortly after the Addicks’ 5-1 humbling at White Hart Lane in the dark days of Les Reed.

Last season they took a win apiece in their respective home games, Newcastle nicking the points most recently thanks to Cisse’s last-minute winner at St James’ Park.

Newcastle are almost certainly going to pick up after last season’s dismal campaign, and things should get better from here – 2-0.