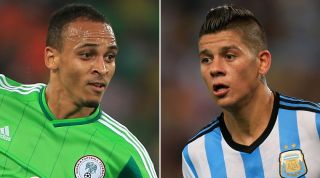 If proof were needed that football was a funny old game, look no further than Nigeria at this World Cup. Having put in one of the most widely criticised performances in the first round of games, they go into the third set of rubbers knowing that only a win for Iran against Bosnia and defeat for the Super Eagles against Argentina will stop them progressing to round two.

We say only, but Nigeria should approach this game assuming Iran – so impressive in defeat to Argentina – will win against already-eliminated Bosnia and that Argentina will perform better than they have so far.

A 1-0 win would actually send Nigeria through as group winners, however, so don’t be surprised if they look to play on the counter-attack as they did to great effect against Bosnia after shaking up their team following that dour draw against Iran.

With goal difference so tight, Argentina can’t afford to rest or rotate despite two victories so far; nor would they want to. They’ve been patchy at the back so far, despite conceding just one goal, and were saved in both games by Lionel Messi’s brilliance, despite having a forward line that is the envy of the tournament. They’re simply not good enough defensively to play for the draw they need to top the group, so it’s time to prove they can cut loose going forward.

The press are in no doubt as to the importance of Messi, Clarin claiming victory over Iran was “undeserved”, while Spain’s El Pais saying coach Alejandro Sabella’s mission should now be “to find the right ecosystem for Messi’s eminence”. Over to you, Alex.

Normally a centre-forward, Emenike was used on the right of Nigeria’s front three against Bosnia, powering forward to set up the only goal of the game (see graphic). He should prove a handful for Rojo, himself normally a centre-back, but in the team at left-back not only to provide height to an Argentina team susceptible to crosses but also to give attacking width to a formation that sees winger Angel di Maria playing as a more conventional midfielder. As you can see from his graphic, Rojo seemed dominant against Iran, but was actually caught out on the break several times. Time to tighten up.

Argentina to hit their straps. 1-3.