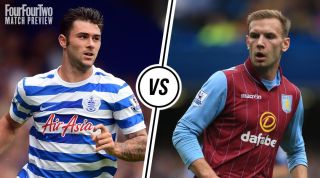 Make or break for Harry.

Comfortably the better side before the break in a performance Harry branded "the best I’ve seen us play since being at the football club, including last season," the R’s couldn’t take their chances as Leroy Fer twice connected with the woodwork.

And even when substitute Eduardo Vargas’ dramatic double had seemingly saved their bacon and salvaged a precious point, the Hoops dared to dream of a winner, rather than hold what they had, and paid the ultimate price on the counter-attack.

“We get a free-kick, there’s a minute to go, I thought he [Fer] was going to have a shot,” rued Redknapp. “Suddenly everyone’s getting in the box, we’re just waiting to get done on the counter. All we had to do was get organised, you don’t get beat.”

Harry had spent the week fending off questions about his job, which had seemed safe for another week after the fighting qualities on show against Liverpool. But that was before he engaged in a public war of words with Adel Taarabt over the Moroccan’s fitness, forcing chairman Tony Fernandes to apologise for the “embarrassment.”

Victory against Aston Villa becomes even more imperative, then, particularly as Chelsea and Manchester City lie in wait on the R’s fixture list.

Paul Lambert will also be looking at Monday as a potential three-pointer having emerged from games against Arsenal, Chelsea, Man City and Everton without a win or goal to their name, conceding 11.

The team’s total of 12 shots on target in 2014/15 has now been usurped by three players (Sergio Aguero, Diego Costa and Graziano Pelle), but if they can work the ball to Andreas Weimann they’ll be fine; the Austrian’s two shots on target this season have both been winning goals against Stoke and Hull.

A third away victory of the campaign on Monday would be Villa’s first against QPR at Loftus Road since 1991* and improve a wretched recent run of form against London clubs; losing nine of the last 10 games and failing to score in five successive visits to the capital since Christian Benteke bagged at Chelsea in August 2013.

But then with Richard Dunne lining up for the opposition, they may not have to notch themselves. The former Villa skipper, who registered his 10th Premier League own goal last weekend to break the deadlock against Liverpool, put through his own net in this very fixture in 2011, gifting QPR a 1-1 draw in stoppage-time.

*Villa beat Fulham 2-1 at Loftus Road in 2004 when the Cottagers were groundsharing with QPR.

The R’s squad is littered with various ailments, which may or may not clear up in time for Monday night’s clash. Rio Ferdinand was an unused substitute against Liverpool due to a groin strain, while Nedum Onuoha and Sandro lasted just 45 and 60 minutes respectively of the Reds reverse before being pulling up lame. Midfield pair Jordon Mutch and Joey Barton have hamstring issues, and goalkeeper Rob Green has had tonsillitis. Alejandro Faurlin is unlikely to play again in 2014/15 after suffering a third cruciate ligament injury.

For the visitors, Libor Kozak and Fabian Delph are out. Philippe Senderos is battling to get over a thigh problem, and would be wise to do so quickly after fellow centre-back Nathan Baker hurt a hamstring in the first half at Everton. Jores Okore has now recovered from a cruciate ligament injury, but has yet to kick a ball competitively for Villa this season despite recently being called up for Denmark duty in Albania.

SEE ALSO Lambert: Cole on track for a starting role at Villa • Rio plans to retire next summer

May’s play-off final hero ran riot in the first half against Liverpool before running out of steam in the second, and deserved to be rewarded for his efforts by seeing somebody in blue and white stick one away.

The former West Ham, Spurs and Fulham frontman was a constant menace for the Merseysiders as QPR made hay with their route one routine. Although he only won 3/11 aerial duels he set up 4 opportunities for team-mates and made the second highest number of attacking third passes behind Raheem Sterling.

“They couldn't play Bobby, could they? That was our plan," said Redknapp. "We played good football when we had to, dropped it up to Bobby and joined him when we had to. He was unplayable for 70 minutes.”

Lambert leads the head-to-head with Harry 2-1 (with one draw) and is unbeaten in the pair’s three encounters since a Gareth Bale brace sealed a Spurs success at Norwich in December 2011. The Canaries avenged that defeat with a 2-1 win at White Hart Lane later that season, with Lambert labelling it the best performance in his three years at the Carrow Road club after arriving in August 2009. Attacking trio Gabby Agbonlahor, Andreas Weimann and Christian Benteke all netted the last time the Midlanders met QPR, a 3-2 home win at Villa Park in March 2013. What Lambert would give for them all to find their shooting boots against the same opponents on Monday night...

At last, some goals for Villa supporters to savour! But a couple at the other end for QPR means a third successive score draw between these two at Loftus Road that leaves neither side satisfied. 2-2.