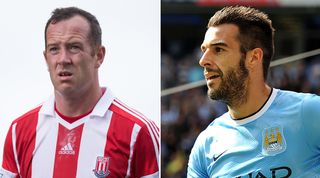 A Mark Hughes derby that could go a long way to proving City’s championship-winning mettle.

Admittedly, Stoke’s new boss is no stranger to facing an old foe – the Potters are the 49-year-old’s fifth Premier League club as manager – but intrigue at the Britannia extends beyond Hughes facing the side he acrimoniously left in December 2009.

Much has been made of Stoke’s post-Tony Pulis attempts at stylistic reinvention this season, but the stats speak for themselves. Last time out in winning 1-0 at West Ham they attempted 405 passes, completing 314, significantly higher than the corresponding 1-1 draw last term (226 out of 327).

With two wins from three – they were only a Simon Mignolet penalty save from an opening day draw at Liverpool – Hughes’ greater emphasis on possession seems to have struck a chord at a club (whisper it) unfairly derided as cavemen cloggers. Upton Park match-winner Jermaine Pennant has impressed coming off the bench, Marc Wilson reinvented as a holding midfielder with Asmir Begovic ever-consistent in goal.

Meanwhile, with a defeat at Cardiff sandwiched between two comfortable home wins to start the campaign, Manuel Pellegrini’s Manchester City are haunted by the ghost of seasons past: away form.

Despite controlling much of the game in the Welsh capital, defensive corners remain a worry. Matija Nastasic’s return from injury should help but more is needed from keeper Joe Hart to command his area at set-pieces. The international fixture hangover shouldn’t be underestimated.

Yet going forward, City remain a potent attacking force. Sevilla new boys Jesus Navas and Alvaro Negredo have settled well, the latter’s physicality and goal threat likely to feature from the start at the Britannia. Fifth against third – it should be a good game.

Charlie Adam pulled out of the Scotland side that played in Macedonia with a sore back and is a doubt. Despite scoring a 40-yard lob for Trinidad and Tobago against Saudi Arabia on Tuesday, Kenwyne Jones may also watch from the sidelines with ankle knack.

Micah Richards has resumed full training but City remain without Vincent Kompany (groin) and Martin Demichelis (knee). Midfield imp David Silva left the Spain squad early this week and is a major doubt - his thigh injury has been assessed by club physios since Wednesday.

A class apart against West Ham, the leggy midfield anchor is integral to Stoke’s chances of getting a result. The tough-tackling Frenchman has always broken up play efficiently, but his passing is much improved.

At Upton Park, he completed 91 percent of his passes, while his understanding with right winger Jonathan Walters is blossoming: N’Zonzi to Walters was the game's most frequent pass combination.

If Stoke are to take City on, the 24-year-old must be equally impressive in defence and attack.

Both still finding their feet at new clubs before now, Hughes and Pellegrini are beginning to leave indelible imprints on their respective teams. How will Pellegrini prepare for the Britannia bombardment? With Hughes’ desire for possession football, will it even arrive?

Both have excellent wingers at their disposal, and he who is more daring could take the honours.