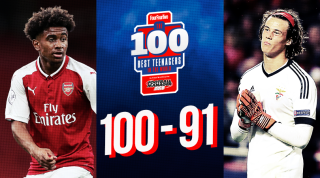 Need to know: Compared to Arsenal icon Thierry Henry, the young Gunners winger is certainly hyped. Nelson is trying to keep his feet on the ground, though, and his attitude has been hailed by Arsene Wenger.

Light-footed and technically talented, Nelson is learning to help out in defence and has been picked as a wing-back in League Cup and Europa League matches in 2017/18. The 17-year-old has also scored nine goals in 10 matches for England U17s and was part of the side which reached the quarter-finals of the 2016 European Championship.

Highlight so far: Nelson couldn’t believe his luck when he came on at Wembley in the 2017 Community Shield. He played only three minutes against Chelsea, but ended up on the winning side. MY

Need to know: Few expected Reese to feature for Schalke after his difficult loan spell at Karlsruhe, who were relegated to the third tier in 2016/17. But boss Domenico Tedesco believes in the youngster nicknamed ‘Super Fabi’, and has handed him six substitute outings in the Bundesliga this season.

Tall and good in the air, Reese tries to emulate his idol Robin van Persie. He’s been praised for his work rate, motivation and intelligence, but needs to improve tactical aspects of his game.

Highlight so far: Reese won the Under-19 Bundesliga with Schalke in 2014/15 and then hit 14 goals for them the following season. MY

Need to know: Svilar will never forget his "trial by fire" – as described by his own manager, Rui Vitoria – in becoming the Champions League's youngest-ever goalkeeper aged 18 and 52 days against Manchester United in mid-October. It ended in a 2-0 defeat and a costly mistake from the Antwerp-born net-minder – but his reaction was telling.

In the return game at Old Trafford, Svilar's first-half heroics – including a saved penalty – kept United at bay, until Nemanja Matic's fierce effort cannoned off the post and back onto the teenager for a desperately unlucky own goal. "We only talk about him being 18 because his identification card says that," said boss Vitoria pre-match. "He actually shows maturity above his actual age."

No prizes for guessing the team that's currently being linked with his services long-term.

Highlight so far: Saving Anthony Martial's spot-kick... and doing it at Old Trafford. "At my age it's something special," Svilar reflected post-match. He's not wrong. JB

Need to know: He's got an Italian passport, as his surname may suggest, but Schiappacasse represents Uruguay and is considered one of the top South American prospects in his age group.

River Plate (of Montevideo) handed him his debut at the age of 16, and Atletico Madrid scouts were quick to react. Schiappacasse is yet to make his mark in Spain but he is highly rated by Diego Simeone and been invited to train with the first team on several occasions.

Highlight so far: Schiappacasse scored an injury-time winner for River Plate in a 2015 showdown with Defensor Sporting. MY

Need to know: Versatile and already experienced, Lotomba looks destined for a very bright future. He is able to play in defence and midfield on both flanks, combining sound tackling and positional sense with speed and attacking instincts.

Having emerged as a right-back for Switzerland U21s, Lotomba is now predominantly a left-back at Young Boys, who recruited him from Lausanne in the summer. His dream is to join a top Spanish club, and it shouldn't be beyond him.

Highlight so far: Lotomba scored the crucial goal that helped Young Boys beat Dynamo Kiev in the Champions League qualifiers – albeit thanks to a disastrous goalkeeping error. MY

Need to know: Carter-Vickers represents the USA at youth level but was born and raised in Southend, and joined Spurs’ academy at the age of 11.

The strong centre-back may have expected to get a decent chance in north London sooner, but it’s proved impossible so far and manager Mauricio Pochettino opted to loan him to Sheffield United for the current campaign. The 19-year-old quickly became the first-choice option for the Championship’s surprise package.

Highlight so far: Carter-Vickers marked his Blades debut with a 33rd-minute winner at Bolton in mid-September. MY

Recruited from Lyngby in 2015, the Dane scored at will for the U19s, convincing BVB’s management to promote him to the senior side. He made his Bundesliga bow at Hamburg in September and continues to impress in the UEFA Youth League, bagging a brace in the 5-3 win over Real Madrid.

Highlight so far: Bruun Larsen scored 20 goals in just 17 matches for the U19s during 2016/17, hitting five against Wuppertaler. MY

Need to know: Nicklas Bendtner was once loaned from Arsenal to Birmingham when considered a great prospect, but hopes are high that Bielik will turn out to be more successful.

There’s still a good chance of that, since the Polish starlet is calm and level-headed. A graceful centre-back who can also perform in defensive midfield, Bielik made 10 league appearances for Birmingham last season but is yet to feature for the Gunners this term. Arsene Wenger purchased the ex-Lech Poznan trainee from Legia Warsaw in 2014 for £2.5m.

Highlight so far: Bielik was impressive in pre-season for Arsenal, though it's difficult to judge him against modest opposition. MY

Need to know: Palermo are famous for their excellent scouting abroad but Lo Faso is very much a local jewel – he was born in Palermo and joined the academy aged 14.

A skilful second striker, he made his first-team debut last season and started for the first time in the Eagles’ 6-2 loss at Lazio. Following Palermo's relegation, Fiorentina took him on loan with an option to buy – and he’s made a positive impression on coach Stefano Pioli.

Highlight so far: A quarter-final appearance at the 2015 European U17 Championship with Italy. Lo Faso scored an important goal against the Republic of Ireland during the group stage. MY

Need to know: A tall, burly striker born in French Guiana, Edouard has already achieved quite a lot. He was top scorer at the 2015 European U17 Championship with eight goals – the best-ever record in the competition – and then produced some sterling performances for PSG in the UEFA Youth League as they reached the final in 2016. Edouard scored his first Ligue 1 goal last season while on loan at Toulouse.

This term he could become a key player for Celtic, and found the net on his Scottish Premiership debut.

Highlight so far: His hat-trick in the 4-1 win over Germany in the final of the 2015 U17 Euros was phenomenal, and Edouard was rightfully selected as the best player of the tournament. MY