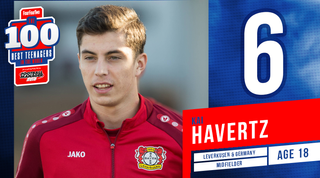 Bayer Leverkusen were stunned in February when key midfielder Hakan Calhanoglu was suspended by FIFA for four month thanks to contractual problems from the distant past.

Little did they know, though, that it would turn out to be blessing in disguise. With the Turkish midfielder leaving for Milan in the summer anyway, Leverkusen got the opportunity to promote Calhanoglu’s replacement sooner than expected.

Havertz, who had already become the youngest debutant in club history aged 17 years and 126 days, grabbed that chance with both hands.

Amusingly, Havertz once missed a Champions League game against Atletico Madrid because he had to take exams at school – but he’s belied his tender years since breaking through and slotted seamlessly into Heiko Herrlich’s starting XI.

Magically two-footed and blessed with an outrageous passing range, Havertz was immediately compared to his idol Mesut Ozil; Leverkusen's sporting director, the legendary Rudi Voller, said so himself. Havertz's coach at the time, Roger Schmidt, praised the youngster for his intelligence and calmness under pressure. "I have never seen such a complete player at the age of 17," Leverkusen captain Lars Bender purred.

At times it feels like Havertz – who only turned 18 in June – has more time on the ball than other players, which allows him to make better decisions in his distribution. He is also tall at 6ft 1in, strong physically and good in the air, which makes life even more difficult for opponents.

Records kept coming for the young star last term. He entered the history books when assisting the 50,000th Bundesliga goal to Karim Bellarabi, and then became Leverkusen’s youngest ever scorer in the 3-3 draw against Wolfsburg.

Havertz finished the 2016/17 season with four goals to his name after scoring a brace in the 6-2 win at Hertha Berlin, and played 1,149 minutes in the Bundesliga.

His contributions are expected to be even more significant this season as countless scouts follow his progress. Havertz is mentioned as a top Liverpool target for the near future, and it’s hardly difficult to understand why – it was only at the beginning of October that he scored four of Germany U19s’ five goals against Belarus.

Scouts will have liked what they saw in a recent Bundesliga outing at Borussia Monchengladbach too, when Havertz assisted the first three goals in Leverkusen’s thumping 5-1 win.

Bundesliga and beyond, beware.