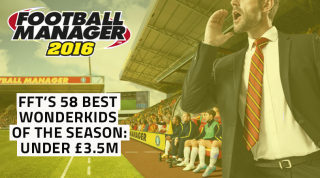 Behold! Our first selection of U19 stars as recommended by FourFourTwo and in order according to how much you'll have to shell out. (For stats nerds, this is according to the latest database release.)

Not only do we list the greatest gems in the game to buy according to budget, but we've also dug out their faces so you know exactly what these stars of the future look like. Some have already featured in our talent spotter series, others are bound to in the near future.

Had great success with one of these? Who have we missed? Let us know in the comments below or share your stories with us on Facebook or Twitter.

Need to know: Highly-rated Dutch U17 right winger, still only 17 but performing and scoring well in the Under-19 Eredivisie.

Ajax have reached an agreement with 16 year old winger Che Nunnely on a three-year deal. #ajaxpic.twitter.com/HOnkWDC1Sh

@MessiMinutes what about this guy. Maximiliano Romero. Was he bought for Arsenal? pic.twitter.com/mzwcJH5Mck

Need to know: Impressive winger set for the big time after starring for Serbia in their U20 World Cup win in 2015, and already featuring for the senior national team. Still just 19.

Need to know: The Bundesliga's youngest-ever foreign scorer, netting last month at just 17. US international attacking midfielder, who has already played for the senior side.

Need to know: Tall Brazilian centre-forward, now 18, but who has impressed at Brazil U17 level previously.

Need to know: Colombian midfield whizz who can be snapped up cheaply when the game begins.

Need to know: Nippy Spanish spearhead, who has scored regularly for Spain U17s.

Need to know: Milan's teenage goalkeeper is now entrenched minding the net at San Siro. Get lucky and you can snap him up early doors in your game.

READ: Donnarumma 'will only leave for a foreign club'

Need to know: Diminutive (only 5ft 4in: even smaller than Aaron Lennon) Boca and Argentina U20 defensive midfielder.

Need to know: Another South American attacking midfielder, Matheus (18) made his senior league debut in 2015 and has played regularly for Brazil U17s. Close to joining Juventus (at the time of writing).