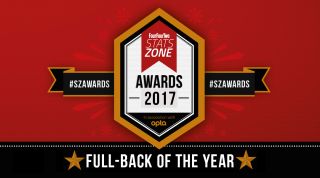 Arsenal once again failed to launch a sustained challenge for the Premier League title in 2016/17, and couldn’t even manage a top-four finisheither.

Alexis Sanchez is the obvious example of a Gunners player who emerges from the collective failing with his reputation intact, but – perhaps a little surprisingly at first glance – Nacho Monreal also deserves to be spared some of the criticism that has been aimed at many of his colleagues.

A combination of injuries and Arsene Wenger's decision to switch from a four- to three-man defence had the Spaniard redeployed as a left-sided centre-half in the final few weeks of the season, but the majority of his appearances still came at full-back. And in comparison to his counterparts in that position, Monreal's raw statistics make for positive reading.

It's worth noting first that Monreal earns this award for his all-round solidity; there were defenders who made more tackles, interceptions and contributed more in the attacking third – but as an overall package, the Spaniard just about came up trumps.

Monreal made the most fifth-most tackles of any defender in the division with 91, while no full-back was able to better his 88 interceptions. Both are eye-catching figures when you consider that Wenger's charges tend to dominate possession and therefore have less tackling and intercepting to do than most other teams in the league. A tally of only 11 blocks is indicative of the high defensive line they usually hold – there's simply not as much defending to be done in the penalty area when you ply your trade for a team like Arsenal.

Monreal wasn't quite as impressive in the attacking third, creating just 12 goalscoring chances for his colleagues - although two of those did end up as assists. But it's important to take his duties within Arsenal's team into account here: in order to aid the balance of the side, the former Osasuna and Malaga defender usually assumes a more conservative role than Hector Bellerin on the right-hand side of the backline, which is reflected in his attacking figures. Sanchez, for example, could not have done what he did without knowing he was covered in behind.

Monreal is a defence-minded full-back because of instruction as well as instinct, so a failure to chip in regularly in the final third shouldn't really be held against him.

Liverpool duo James Milner and Nathaniel Clyne, as well as Manchester United's Antonio Valencia, ran the 31-year-old close in this category. Milner created a league-high 57 chances, although he did take many of Liverpool's set-pieces, while Clyne and Valencia posted consistently good numbers across the board – just not quite as good as Monreal.

It's the Arsenal man who wins the Stats Zone award in his fifth season at the Emirates, despite his team's rather disappointing campaign overall.

Monreal also came close to scoring a 40-yard own goal (aka 'doing a Lee Dixon') in the recent 2-0 triumph over Sunderland, ultimately giving away an indirect free-kick inside the penalty area thanks to the quick reactions of goalkeeper Petr Cech. It's just another example of something few others managed.