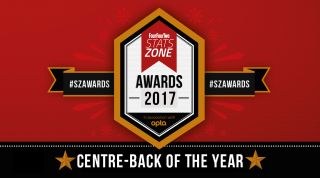 Cesar Azpilicueta is a right-back by trade, but you’d have been forgiven for forgetting that this season.

Before 2016/17, the Spain international had been deployed on the left of a four-man defence for a large chunk of his Stamford Bridge spell, but was installed as a right-sided centre-half when Antonio Conte switched to a 3-4-2-1 formation during September's 3-0 defeat by Arsenal.

That he has thrived and not looked at all out of place in yet another new position is testament to Azpilicueta's versatility and quality as a defender and all-round footballer.

With the caveat that defensive statistics can at times be misleading – such figures tend to be descriptive more than anything else – Azpilicueta's numbers from Chelsea's latest title triumph are impressive.

He ranks 12th in the defenders’ interceptions charts, which is particularly strong given that the Blues tend to dominate possession, while his tally of 84 tackles places him above every other central defender in the division (only eight players ranked higher, all of them full-backs).

To further reinforce his reputation as one of the most reliable players around, Azpilicueta didn't miss a single minute of top-flight action.

When David Luiz re-joined Chelsea from PSG last summer, it was widely presumed that he would become the side's chief ball-playing defender. Instead, that role was assumed by Azpilicueta, who regularly stepped forward into midfield and duly made more passes (2,457) than either the Brazilian (1,570) or Gary Cahill (1,849).

No other Premier League centre-back broke the 2,000-pass mark, and Azpilicueta's eye-catching tally was combined with an equally excellent success rate of 86.98%.

Particularly notable were the 21 goalscoring chances and four assists he provided, the latter of which was only bettered by three other defenders (all out-and-out full-backs in Kyle Walker, Kieran Trippier and Adam Smith, 5). Crucially, it was he who provided the cross for Michy Batshuayi's title-sealing goal at The Hawthorns.

Above all else, Chelsea's success under Conte was built on a solid defensive unit, and Azpilicueta played a crucial role in each of the west Londoners' 16 clean sheets. That's part of the reason why he beats the likes of Jan Vertonghen, Ben Mee, Michael Keane and Gareth McAuley to the Stats Zone award; each had excellent seasons – both as individuals and as part of collectives – but Azpilicueta edges them out due to his decisive class in determining the destination of the Premier League title.

“It’s been a massive season for him,” Conte said after the recent 4-3 victory over Watford. “Azpi played in a fantastic way. When you have this type of player it’s great for the coach. If I ask him to go and put on the gloves and stay in goal he’s ready.

“He's a model footballer and able to play in different roles. Today he played as a wing-back, he scored one goal and could have had two or three. He’s had an amazing season.”

Right you are, Antonio.