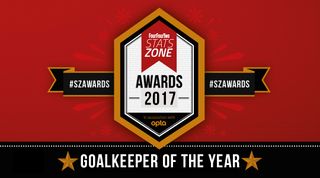 Burnley were widely tipped for an immediate return to the second tier this term, so Sean Dyche deserves huge credit for having kept their heads above water with a surprising degree of comfort. The Clarets reached the 40-point mark and secured their Premier League status with two games to spare, although things could have easily been very different were it not for Heaton.

The former Manchester United custodian was Burnley's No.1 during their last stint in the top flight, which ended with relegation in 2014/15. Much like the team as a whole, though, Heaton has looked much better equipped for the task at hand this time around, so much so that he fought off competition from more illustrious names such as Hugo Lloris, David de Gea and Thibaut Courtois to scoop this year’s Stats Zone Goalkeeper of the Year prize.

Thou shalt not pass

The two-time England international was a model of consistency for the Lancashire outfit, contributing to 10 clean sheets in his 35 appearances and making a league-high 141 saves. Sunderland's Jordan Pickford came close to his compatriot with 135 stops, but Heaton's overall save percentage of 74.6 puts him above all bar Lloris and Cech, and further demonstrates just how effective he was at repelling opposition forwards.

The fact that Burnley allowed more efforts on their goal than any other Premier League team makes their goalkeeper's contributions all the more impressive.

Heaton’s most memorable performance came in a goalless draw at Old Trafford in October, when he repelled 11 of his former club's shots and, tellingly, had more touches than any of his outfield team-mates. Manchester United registered a remarkable 38 attempts that day, yet Burnley's backline stood up strong to the challenge and, when they were breached, Heaton proved an unbeatable last line of defence between the sticks.

He didn’t rank quite as high in other areas of the game, with 26 catches only enough for 12th place in the overall standings. Yet a goalkeeper's principal duty is to stop the ball ending up in the back of the net, and it's fair to say that Heaton did more than most towards that end in 2016/17.

“I watched David de Gea the other night and I thought he was tremendous – not just his saves but the way he is away from the ball, prowling across his box and reading the game," his manager Dyche told reporters earlier this season. “I think Tom has a bit of that in the way he has developed in his career over the last two years and as he continues to do so.”

He may not have a great deal of improvement left in him given that he turns 32 next year, but no Premier League goalkeeper was more effective in protecting their team's goal than Heaton. Burnley can't afford to lose him this summer.