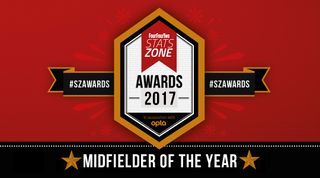 Tottenham may have been unable to end their title drought in 2016/17, but it was another excellent season for Mauricio Pochettino's men. A second-placed finish was the club's highest since 1963, while their final points tally of 86 was 16 better than the 70 they earned in last season's third-placed finish/

Much like last year, it's not easy to identify who Tottenham's best player was. Jan Vertonghen, Dele Alli and Harry Kane are certainly contenders, while Toby Alderweireld was once again a model of consistency in the heart of the backline.

Perhaps, though, the accolade should go to Eriksen, who has lapped up praise after a stellar season of consistency at the sharp end.

Contributing to all areas

What counted in Eriksen's favour over his midfield rivals was his all-round contribution to Tottenham's season: he's primarily a creator tasked with setting up scoring opportunities for his team-mates, but his work rate and intelligence mean he's far from a passenger without the ball – vital if any player is to thrive as part of Pochettino's high-energy, heavy-pressing unit.

And thrive he has. Only Kevin De Bruyne (18) bettered the Dane's tally of 15 assists, while Eriksen led the way when it came to chances created (112 to second-placed De Bruyne's 103), 16 of which were defined by Opta as 'big chances'.

He also netted eight times himself, which ranks as the joint-eighth best return in the league for a midfielder.

Eriksen also scored highly when it came to passes, with only 11 midfielders having made more than the 25-year-old; while 12th place may not sound particularly impressive, it's worth bearing in mind that most of the players above him – including Kante, Jordan Henderson, Granit Xhaka and Spurs colleague Eric Dier - play deeper in the pitch and are therefore always likely to see more of the ball. The Denmark international completed his 1,977 passes at a success rate of 80.17%, which only dropped to 78.23% in the opposition half of the field.

"He’s a player who has this great ability to make the team tick and also make his team-mates look better," Pochettino said of his player in an interview with Spanish publication EFE earlier this year. "He is, without doubt, someone very special, a footballer who interprets, without needing to be told, what his team-mates can do. He’s the brain, the player who helps everyone else understand the game better."

The sheer level of competition may prevent him from winning Tottenham's player of the year prize but, statistically speaking, there surely hasn't been a better all-round midfielder in the Premier League this season.