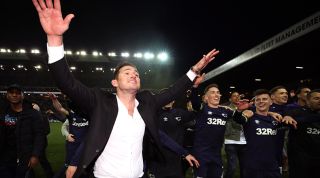 Would you go back to a long-lost love if you knew it would end in tears? If you're Frank Lampard, the answer is a clear yes: as he returns to Chelsea for another impassioned fling with the club he loves, the only price to be paid is the near-guarantee that it will have an unhappy conclusion.

If that sounds rash, it's also strangely common. For all we're told that football is a hard-nosed and unsentimental business, the fact is that even the most hardened veterans find themselves drawn irrevocably back to their former sweethearts.

Sometimes it unfolds in fairytale fashion. Most of the time it doesn't. In the last decade alone, Alan Shearer, Kenny Dalglish and Stuart Pearce have joined the ranks of club legends whose prodigal returns have merely served to footnote their legacy with some sort of fractiousness, fallout or failure. It's already happened once before at Stamford Bridge, where Jose Mourinho strode back to misty-eyed glee in 2013 before departing, two years later, amid a scene of scorched earth and civil war.

It's fact of football that almost all managerial reigns end in failure. But that end tends to arrive especially soon at Chelsea, a club that has spent the last decade-and-a-half making lie of the received wisdom that footballing success is built on continuity.

Fifteen years, 15 managers and very few tears shed when the P45s have been handed over. Roman Abramovich does not make decisions on sentiment, let alone nostalgia; you sense that the owner is in full agreement with Tony Soprano's belief that "'remember when' is the lowest form of conversation".

As far as the manager is concerned, the remit is a narrow one: parachute in, apply the defibrillator for a season or two and, when the inevitable slump kicks in, meet your fate with good grace. Nothing wrong with any of that – but it does tend to remove the element of romance from the fan-manager relationship. As demonstrated by the fans' loveless year with Maurizio Sarri, it's hard to strike up an affection for someone you know won't be around for long.

All of which raises serious doubts about the point of hiring a coach whose chief qualification for the Chelsea job is his ability to set hearts aflutter in the stands. That isn't to discount the possibility of Lampard being a barnstorming success at Stamford Bridge: taking a good Derby side to a respectable finish before falling at the final hurdle is not bad for a maiden year in management.

Yet nor is it proof that a career of Fergusonian trophy-hoarding lies in wait. There's a reason that only one club is after his signature.

And there's a reason that club is Chelsea, too - and it would be a perfectly good one were it not for the fact that, well: it's Chelsea. Romance as a force for footballing success, at least in the short term, should not be dismissed. On the other hand, Chelsea have spent 15 years systematically de-romanticising the position of manager; that they should suddenly hire an underqualified fans' favourite suggests either a sharp change of MO or an alarming dearth of options.

Perhaps Lampard can take heart, paradoxically, from one of Chelsea's least accomplished coaches of recent years: Roberto Di Matteo fell victim to the Stamford Bridge whirlwind, being hired and fired in the space of six months, yet managed to depart with fans' fondness for him even stronger than when he arrived.

On the other hand, Chelsea's new boss need only look to Old Trafford for proof that while goodwill can get you hired, it can't make you succeed. Rekindling an old flame might feel good to begin with, but there's nothing like a lame losing streak to kill even the warmest romance stone dead.