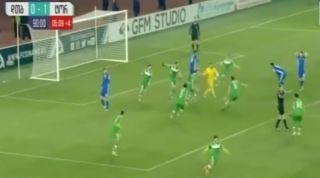 Going into the final league match of the season, Kutaisi needed a victory to secure the title, while Tbilisi required just a point to win the league for the 17th time.

The visitors were leading 1-0 heading towards the end of injury time, but the game concluded in high drama as Dinamo won a penalty with only seconds left to play.

Dinamo's 21-year-old captain Otar Kiteishvili stepped up to take the spot-kick knowing that all he had to do was score to hand his club the title. Yet unbelievably, his weak penalty down the middle was saved by goalkeeper Roin Kvaskhvadze's left boot.

The referee blew his whistle immediately afterwards, which meant Torpedo had won only their fourth league title in history.

To cap the bizarre turn of events, the referee brandished a straight red to one of Torpedo's players amid their wild celebrations.

The champions could make it a double-winning campaign when they face Chikhura in the David Kipiani Cup final on Saturday.