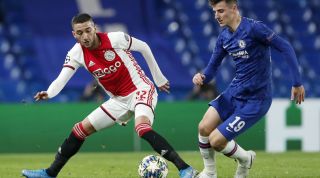 Chelsea’s summer of 2019 was enough to kill some clubs.

Eden Hazard confirmed his flight to Madrid in the post-match interview after winning the Europa League. The club were grounded from buying anyone to replace him. Marmite Maurizio Sarri departed to take on Juventus.

The Blues were left starless, transferless and managerless - a triple threat of sorts - caught between the pragmatic revolving-door phase that the club had become infamous for, and a brave new Sarriball world which received mixed reviews at best.

Where Chelsea stand in February 2020 is, frankly, admirable. The top four is on; they’ve just had a whole month to transfuse new blood into the side and have chosen to stick by kids who have been learning on the job all season. A Champions League return to Bayern Munich awaits. The fans don’t seem all that antsy over the situation. They’ve landed on their feet in the most un-Chelsea way possible, right?

A club that had a reputation for sacking elite managers for sneezing, gave the job to a near-rookie. A club that often spends their way out of trouble - wisely, it has to be said - have relied on the depths of their academy. A club that do things the bullish way, the win-at-all-costs way, leant not on safety-first Conteball, Mourinho mind games nor Guus Hiddink renting an Airbnb for a year, but invested in a progressive style of football that needs time, space and patience to flourish.

Hands up - all those years ago when Eden Hazard first saw Florentino Perez wink at him from across a bar, who predicted that Chelsea would ultimately wait two windows to replace their handsome prince?

Despite how curious the Chelsea project is, Hazard still leaves an obvious hole in the side.

Mauricio Pochettino’s Tottenham are a relevant comparison with Chelsea, and not just when it comes to how the public have fawned over a young coach using young players and bucking the trends of a top-six club spending like there’s no tomorrow. Like Poch, Lampard employs a sturdy 4-2-3-1, built on both brawn and brain in the centre. There’s a young English talent who interlinks play nicely and makes darting runs into the box (Alli or Mount), and a young striker hangs on the shoulder and is growing in confidence (Kane or Abraham). High full-backs, high press, high intensity and the flick of a tactical switch to three at the back when things get hairy. It’s a good impression.

That Spurs side lacked one player - a Hazard. A game-changer. A born winner capable of grabbing all 10 team-mates by the collar and dragging them to the finish line himself. Like Hazard did so often last season; like Bale did at his pompous White Hart Lane peak.

Ajax's Hakem Ziyech makes perfect sense. This is a young Chelsea side that are starting to click - and yes, there are obvious deficiencies here and there - but the lack of a clear killer around the final third became all the more obvious when the Blues lined up opposite to Leicester, complete with James Maddison, the other week.

Where Chelsea used to very obviously overload the left, it’s been roughly equal between the right, left and centre this season. Imagine the Moroccan, hands on hips, ready to receive in that left half-space. With no standout creator at present, Callum Hudson-Odoi has glimmered intermittently and Willian has bullied hard on the right; Christian Pulisic has cameoed as a secondary playmaker and Mason Mount simply isn’t the kind of player who carries creative burden. Mateo Kovacic and Jorginho have had to step up from deep, too.

At 26, Ziyech is about to hit peak - sooner than most of Chelsea’s side, too. He has shoulders broad enough to carry the creative load. He’s proved that he can hack it deep in the Champions League, too.

And that’s perhaps why he’s so necessary right now. Chelsea neglected building a project like this for so long because there was no time to while they were sweeping everything in their wake. They already had born winners with significant experience of stepping up to boss European ties and top-of-the-table clashes. So Stamford Bridge became a conveyor belt for winners rather than a finishing school for finer talents.

In that respect, Ziyech is a throwback, despite matching the curtains of the new regime - a man who scored home and away at Real Madrid and Tottenham in Europe, but still has significant room to grow.

Chelsea didn’t have a choice in not replacing Hazard right away. What they built in his absence was fascinating. Signing Ziyech is a sensible third act.

FEATURE 20 years of Jose Mourinho: The brilliant and bizarre moments of his career so far