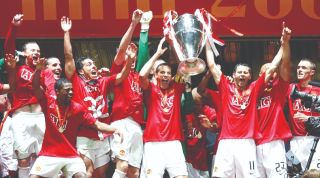 To this day, Rio Ferdinand still can’t believe that Chelsea captain John Terry missed his crucial spot-kick which would have given the Blues their first Champions League title.

After a 1-1 draw with Manchester United in normal time and an extra-time period clouded with controversy following Didier Drogba’s red card, the 2008 Champions League final was deep into the penalty shootout: Cristiano Ronaldo missed his, leaving Terry and Chelsea one successful penalty from glory.

However, the former England captain famously slipped in his run up, hit the post and United won on sudden death penalties.

Ferdinand knows Terry well from his time with the England national team and says that Terry would have easily scored that penalty under normal circumstances.

Reflecting on the final in the March 2020 issue of FourFourTwo, he said: “It was a crazy night, something that will live long in my memory... It was a mountain you thought you’d never be able to get up and conquer.”

“I’d watched him [Terry] take penalties in training with England, and he’d always been so cool and calm under pressure. At that point, I didn’t see it turning out the way it did.

But Ferdinand admitted that had Anelka scored, he believes United would have lost the final – as he was set to take the next penalty and is still adamant that he would not have scored.

He added: “I was next, so I was f**king happy Edwin saved Anelka’s penalty.

“My legs were jelly and I didn’t know what was going to happen – I wouldn’t have scored, man. I was too nervous.

“When we finally won, the feeling was unbelievable. The only way I’ve described it is if you could bottle that emotion and sell it, you’d become a billionaire.

“You don’t get that feeling anywhere else. To be a football player and conquer that... it’s f**king mad.”

Read the full interview with Rio Ferdinand in the March 2020 issue of FourFourTwo magazine, out in shops and available digitally now – and available to order online. Our new magazine features the full story of Jose Mourinho's quest for a third Champions League title, an in-depth profile of African Player of the Year Sadio Mané plus more exclusive interviews with Mateo Kovacic, Andres Iniesta, Benjamin Mendy, Peter Reid, Djibril Cisse and many more. We also find out the greatest ever European Cup losers, visit the Indian Ocean club competing in the Coupe de France, and debunk football's greatest myths.

MOURINHO 20 years of Jose Mourinho: The brilliant and bizarre moments of his career so far

QUIZ Can you name every player to have played under both Jose Mourinho and Pep Guardiola?