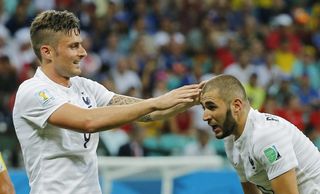 The build-up to this Group E match was dominated by talk of how Switzerland's rigid defence would nullify France's fluid attack. Yet in the end, Les Bleus ran out comfortable winners, with their forward trio doing huge damage to Switzerland's chances of making the last 16.

But what exactly did the two teams get up to during those 66 seconds? Here's exactly what happened, as Switzerland kicked-off, before quickly giving the ball away...

Benzema only got on the scoresheet once, but will certainly feel it could have been more. Not only did he see a first-half penalty saved by Swiss keeper Diego Benaglio, but he also saw another strike ruled out when the referee blew for full-time just as the Real Madrid striker was queueing up a last-gasp effort from the edge of the box. He was also very assured in possession, completing all 15 of his passes in the attacking third.

Arsenal forward Giroud had reportedly made clear his displeasure at not being selected by Deschamps to start the Honduras match, and his performance against the Swiss backed his case perfectly. Like Benzema, he also nabbed a goal and an assist. Giroud may have only hit the target with 1 of his 3 shots, but he provided an aerial outlet when his team were under pressure and also made a surging run that helped created Mathieu Valbeuna's goal.

Speaking of Valbuena, the mini Marseille marvel was the third French star to notch on both the goals and assist tables. His early corner was headed in by Giroud for France's first (1 of 3 chances he created), with the Arsenal striker returning the favour by teeing up Valbuena for France's third after a rapid counter-attack.

Some of Switzerland's pain was also self-inflicted. Their centre-back pairing of Johan Djourou and Philippe Senderos (an early substitute for the injured Steve von Bergen) both struggled. Neither won a single aerial duel, and between them they made just 6 clearances.

Switzerland can be confident Honduras won't test their defence in quite the same manner, improvement will still be needed. As for France, it would seem sensible not to get carried away, but they certainly look the part at this early stage of the tournament.