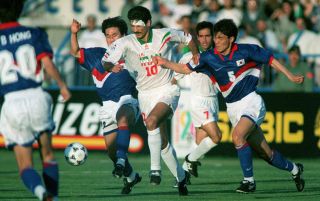 This feature originally appeared in the April 2020 issue of FourFourTwo. Subscribe today!

Ali Daei didn’t just make history once. He was forced to do it twice.

Ferenc Puskas’ record of 84 international goals had stood for 47 years. The Hungarian Revolution of 1956 had cruelly ended his career with the Magical Magyars, aged just 29. After defecting to Spain, Puskas scored 242 goals for Real Madrid – but no more at international level.

By November 2003, Daei had reached 83 goals for Iran. Score in an Asian Cup qualifier against North Korea, and a share of the record would be his. After 52 minutes at Tehran’s famous Azadi Stadium, he did exactly that – breaking the deadlock with a penalty.

But the glory would last for mere seconds: Iranian fans chucked a firecracker onto the pitch in celebration, striking a North Korean player. The visitors walked off the field and refused to return. North Korea were banned from international competition for a year and Iran were awarded a 3-0 victory. But Daei’s goal was expunged. He would have to equal Puskas’ record again.

He did it a week later, with another spot-kick against Lebanon in Beirut. This time, it counted. Within days, he had surpassed Puskas and become international football’s greatest-ever goalscorer, after netting again in the return match against the same opponents.

By the end of his career, the man nicknamed ‘Mr Goal’ had scored 109 times in 149 matches for Iran. At the time, it put him 25 goals ahead of any other player in history.

Daei’s club career was less glorious – in fact, it delivered only 134 goals. The tall frontman had burst onto the international scene with seven goals for his country in 1993 while playing for Bank Tejarat FC. Compulsory military service in the Iranian Air Force restricted him to one Iran appearance over the next two years, though, and denied him a transfer to J.League outfit Jubilo Iwata. Eager for a return to the national side, he was told he must join Iranian giants Persepolis if he wanted another call-up – even though all his family supported Esteghlal, their bitter rivals.

Daei signed for Persepolis and returned to the Iran squad in 1996, scoring 22 international goals in the calendar year. Already, it made him Iran’s all-time leading marksman; Gholam Hossein Mazloumi previously held the record, with just 19. Daei bagged four in a game against Nepal and five against Sri Lanka in qualifying for the Asian Cup, but his greatest display came at the tournament itself, where he struck four in just 23 minutes against South Korea.

After a brief spell with Qatar’s Al-Sadd, Daei earned a 1997 move to Bundesliga club Arminia Bielefeld alongside his Iran team-mate Karim Bagheri. The duo had just played in a 17-0 thrashing of the Maldives in World Cup qualifying; Bagheri got seven to Daei’s two.

The moustachioed striker was never the most outstanding player technically, but he was decent in the air and a penalty box predator. He could be strong-willed – Daei fell out with Iran boss Mohammad Mayeli Kohan and was briefly banished, but Mayeli Kohan was soon sacked – not that it ended the feud, which continued for nearly two decades. Mayeli Kohan was jailed in 2014, after Daei successfully sued him for defamation.

The striker helped Iran qualify for their first World Cup in 20 years, and although he didn’t score at France 98, Daei provided the assist for Mehdi Mahdavikia to famously net in victory over the USA. Just before the tournament, he had sealed a move to Bayern Munich, but struggled for regular game time in his solitary season; Daei played second fiddle to Giovane Elber and Carsten Jancker, scoring only six times. He became the first Asian to play in the Champions League, but remained an unused substitute when Bayern faced Manchester United in the famous 1999 Camp Nou final.

Daei’s determination to play for Iran at the Asian Games midway through that season had not aided his club career, but it had been worth it, at least: he notched nine more international goals during the tournament, as his country won the gold medal.

Soon he would join Hertha Berlin, bagging a brace in a Champions League win over Chelsea, and scoring at San Siro against Milan. Daei netted four times as Iran beat Guam 19-0 in World Cup qualifying – among 20 international goals in 2000. But this time, Iran failed to make the World Cup, losing to Ireland in a play-off.

Daei was 34 by the time he equalled Puskas’ international record in 2003 – back at Persepolis in Iran, after a short spell with UAE side Al Shabab. And he wasn’t quite done: the creaking icon captained his country to the 2006 World Cup, becoming the first player to hit 100 international goals with four against Laos in qualifying.

His 109th and final effort came three months before the start of the tournament, though, in a friendly against Costa Rica. Aged 37, he was unable to score at the World Cup finals amid growing calls for him to be dropped. Benched for the second group game against Portugal as Cristiano Ronaldo’s penalty confirmed their elimination, Germany 2006 proved to be the end of Daei’s international career.

He later became the national’s team boss, only to get the boot as Iran’s qualification prospects for the 2010 World Cup began to look doomed. A variety of club jobs followed – most recently with Persian Gulf Pro League side Saipa. After being dismissed in 2019, he went nuclear by accusing the club’s CEO Mostafa Modabber of operating under a false identity. He claimed the CEO’s real name was actually Ghafour Darjazi, a former commander widely reported to have been involved in a high-profile assassination.

But if Daei’s coaching career hasn’t always gone perfectly to plan, his international haul seemed untouchable – even if 96 of his 109 goals came against Asian opposition. He believes his total was 111, but FIFA say a clash with Afghanistan at the 2002 Asian Games was an under-23s fixture, Daei appearing as an over-age player.

As Ronaldo edges closer, though, Daei’s record will soon be gone. “I’m so proud for as long as it lasts,” he said. “But records are meant to be broken. I’m happy such a great player will surpass me, because I consider Ronaldo among the top three players ever.”

When CR7 finally gets there, he’ll hope he only has to do it once.