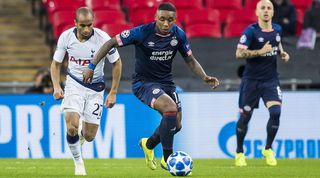 On Tuesday morning, it was announced that Tottenham had reached an agreement with PSV for the transfer of Steven Bergwijn, a dynamic young forward who has built a fine reputation for himself in the Eredivisie.

Dutch football still has its history, but no longer its reputation. While it continues to be a breeding ground for young players, the wealth of the elite European leagues has cast it in shadow. So, while its bigger clubs continue to attract admiring glances for their performances in continental competition, the league itself occurs – relatively speaking – in a contextless blind spot.

That’s reflected in its exports. For every great signing, there's a crushing disappointment. For every Christian Eriksen, an Afonso Alves. For each Dusan Tadic, a Jordy Clasie. Over time, that’s created the perception of total randomness – this sense that no matter how good a player looks in Holland, he could be almost anything at all by the time he reaches Italy, Spain or, in this case, England.

And yet there is always the expectation, part of which seems to be informed by the age of the YouTube highlight video.

5 things you should know about Steven Bergwijn

They're little more than raw propaganda. Some YouTube channels are very diligent, presenting a more balanced case, but in most instances they’re just glossy sales brochures. Not true depictions of what a player is worth or capable of, but a sort of best-case scenario – what he might do for his new club if the sun is shining, the grass is cut to just the right length and the ball bounces in exactly the right way.

And there’s nothing really wrong with that. Football is entertainment, transfers are part of the spectacle, and who doesn’t want to believe in a new player’s transformative value? In part, fan culture actually depends on that kind of optimism.

But it’s still hard to avoid the conclusion that it was easier for players before the internet age. Not all of them were equal, of course, some still had reputations which preceded them, but never did they arrive with such an (artificially) comprehensive expectation of what they might be, where they might play and how they might do.

The problems created are obvious. In Steven Bergwijn’s case, the tenets of his game are already clearly staked out. He does this well. And this. And this. As a result, prior even to confirmation of his move, there are Tottenham fans who – in spite of never having seen him play in anything other than clip form – are already preaching on his best possible position, what impact he may have within their squad, and why he’s definitely (not) worth the fee the club are committed to paying for him.

That’s not a criticism. We’ve all done it. But it’s an observation of a strange phenomenon and recognition of the curious pressure which now exists in this situation. For Bergwijn, the expectation is not just for him to play well, but to conform. To be an answer to a very specific set of questions and to be the calibre of player seen in those idealised video portraits.

In itself that’s troubling. A contradiction, really, because every transfer in the game’s history has depended on adaption to a degree. That’s especially true when a move involves a change of country and, as a result, significant differences in culture and, from a technical standpoint, the level of competition. For an attacking type, that implies the need to become more economic – to dribble less, to release the ball more quickly. Essentially, to refine his own profile and move away from the very virtues which look so compelling on film.

When a club buys a new player, it really just purchases attributes. Not a fully-formed component to drop into a ready-made slot in its formation, but a batch of abilities which, over time, can be tailored and tempered to suit the way that team plays.

And maybe that was accepted more before this age of total knowledge? Maybe the environment new players entered back then was healthier as a result, and maybe more tolerant of the fact a footballer didn’t necessarily have a pre-determined shape?

The result would have been a greater curiosity. Without those highlight reels, there was probably more of a willingness to let players grow. Instead of an immediate and binary decision being made about what they could or could not be, an understanding for their abilities would grow in time. With each game a new facet would reveal itself. With every touch the player took, another piece of his jigsaw would be laid.

Now, there's no need for that. We 'know' already and we've made our minds and, while there's no going back, that can't be a good thing.

COLUMN How do Manchester United get out of this slump? Lessons from their 1970s rebuilding