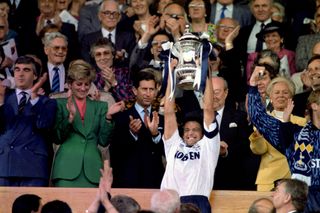 Tottenham legend Gary Mabbutt had bad luck with injuries during his playing career, but that does not compare with the injuries he picked up post-retirement.

One particular gruesome tale for the former defender, who made 477 league appearances for Spurs, was when a rat ate a considerable part of his leg while he was on holiday.

The incident took place in 2018 while he was staying in South Africa with his daughter.

Speaking in the June edition of FourFourTwo, available now with free delivery, Mabbutt said: “My daughter got an internship with a vet in the Kruger National Park. I stayed with her and we lived 60 miles from the nearest town.

“I went to bed, and half an hour later she came in saying, ‘Dad, something bit my thumb!’

“After a while we went back to bed, but I woke up again and my thumb was bleeding. I went to get up, and the bed was covered in blood.

“A rat had started chewing on my foot, got no reaction from me and then tucked in – from the middle toe to the bone. There is also a hole underneath my foot.”

This is not the only bad lack Mabbutt has had since hanging up his boots in 1998. The 58-year-old nearly lost his leg following an emergency operation a few years ago.

He added: “Quite a lot of things have happened in my life, but I’ve dealt with them and carried on as best I can.

“I woke up one night and my left leg was killing me – there was no blood going to it.

“I needed a seven-hour operation and luckily they saved the leg, but I can’t kick a ball again or stand on wet pitches, so I had to give up coaching.

“Then a week after the last game at White Hart Lane, I was rushed in for a heart bypass.”

Read the full interview with Gary Mabbutt in the June 2020 issue of FourFourTwo magazine, available in shops and online now. Our new magazine looks at the 100 greatest managers in the history of football, exploring the tacticians and tinkermen who have influenced the game more than anyone else, investigates the fall of Barcelona's famed La Masia academy, presents eight pages of quiz questions and football posers to keep you busy during lockdown and discovers the trophy you've never heard of, that Liverpool are proud owners of. We also chat to Bobby Zamora, Shaun Wright-Phillips, Kemar Roofe, Jorginho and more.