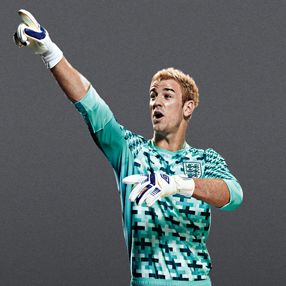 On September 3, 2010, little under a year ago,  Joe Hart made his competitive debut for England in a Euro 2012 qualifier against Bulgaria at Wembley. Jermain Defoe scored a hat-trick, but just as noticeably the nerve-free Manchester City keeper made a number of key saves as England prevailed 4-0.

It’s still incredible to think that Joe Hart, now 24 and the first name on the team sheet for both of his Italian managers, Roberto Mancini and Fabio Capello, first tasted competitive football for the Three Lions so recently. This was after a stunning season on loan at Birmingham City, and an equally impressive campaign for his parent club, forcing Shay Given out of the team and on the road to Aston Villa.

Now Hart is playing in the Champions League with Manchester City and is seemingly England’s undisputed no.1. But, as he tells FourFourTwo.com, he’s not taking anything for granted.

How does the job title ‘England’s no.1’ sit with you?
It doesn’t! I don’t think you can ever have that kind of status to you unless you play the amount of games that someone like David Seaman played. Obviously there was [Peter] Shilton, and Paul Robinson has played a lot of games, whereas I’ve only played a handful of games myself. I’ve got a long way to go before I can even start thinking about that as my spot.
To be honest, [keeping for England] is something I never thought I would do, not because I didn’t think I could, but because you personally never feel it will happen.

But as a goalkeeper, there’s only one spot up for grabs...
Yeah, but you have to keep working hard because there are lots of other people who want that spot, and want to be feeling the way I am now, and I appreciate that. Not having the no.1 spot is only just around the corner for me; knowing that pushes me on.

There are a few young players making their mark on the national side at the moment. Do you feel this is part of a new England team that has come as a result of the disappointing World Cup in South Africa?
Not really, because there were lots of young players out in South Africa, such as [James] Milner, [Aaron] Lennon and myself – it’s just that people didn’t want to focus on that at the time.
Now, obviously, we’ve got Jack [Wilshere], big Andy Carroll, Ashley Young and Adam Johnson, and there’s plenty of good young talent in England, but there always has been. And we’re lucky to have the more experienced players, who have been there and done it, to be there when we need them.

So, then. England goalkeeper or England manager: which is the tougher job?
They’re both tough – I think even left-back for England is a tough job! Playing for England is a great honour but at the same time it’s a tough job, but one of those tough jobs you enjoy doing.
As a manager, you can win 5-0 and not have to make any decisions, and get lots of praise. As a goalkeeper, you can be stood there and not even looking when the ball hits you in the face and goes wide – and you get a lot of praise. It works both ways. You can get a lot of negatives but you also get a lot of positives.

Everyone’s rough on the goalkeeper though – how do you focus when you’ve got the away support behind you giving you stick?
Same as ever: you’ve just got to focus on the game, the ball and the people you’re playing against. Of course, as a goalkeeper things can change in the blink of an eye. You can be beating a side for 80 minutes, then come under pressure in the last ten – but you can also be getting peppered from the first minute. That’s why it’s such an interesting position, and why I enjoy it so much.

Finally, you eat very healthily but do you have a vice?
Barbecue chicken pizza does it for� me! I just chuck the chicken on the pizza and throw it down my neck. Steak, medium-rare as well

Interview: Ben Welch. Joe Hart is wearing the new Umbro England Away goalkeeper’s kit which carries a formation of crosses to represent the flag of St George. It is crafted from a special cotton fabric with panels built for stretch and movement. The lower part of the arm on the shirt offers a tight fit offering articulation and compatibility with goalkeeping gloves. Visit umbro.com.