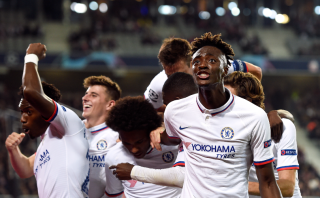 Hakim Ziyech will soon arrive at Chelsea. Before much longer, Timo Werner is expected to join him. All of a sudden, the attacking places in Frank Lampard’s side are looking fewer and further between and the ominous music is starting to sound; is this the end of the youth movement at Stamford Bridge?

No, because to bracket that clutch of players together is, in itself, reductive. What happens next will depend on how they individually respond. It will show for sure whether they can survive in a world in which they’re not artificially protected by a transfer ban.

But a clarification first – this isn’t a U-turn. This is what Chelsea have to do. While the signing of Ziyech drew dark mutterings about the club’s commitment to England’s next generation of players – mutterings that will surely become darker when Werner is confirmed – the club’s first obligation is to be competitive in the Premier League.

• How will Chelsea line up with Werner and Ziyech? 5 potential formations

Ideally, that could be achieved by giving developing players the right platform, allowing them to grow and mature, and then incubating them with continuity. In reality, as successful an approach as that can be in less affluent leagues, English football is enslaved to the notion that spending heavily in key positions is a prerequisite to success.

Is that the right long-term approach? Probably not, but big transfers typically delivery sharper, more substantive jolts to performance and while they sometimes come with a tax to pay in time, that’s a secondary concern behind the league’s year-to-year imperatives. Whether that’s ideologically correct is irrelevant; that’s how the most powerful clubs in the country think and, as a result, Chelsea have to conform.

After all, nobody in London need look far to find out what happens to those who don’t. Tottenham were the Premier League’s great believers in stability and internal improvement and yet, unfortunately, this period of their history will likely term them a cautionary tale. If you don’t supplement at least partially from the outside, you’ll quickly be passed by the clubs that do. Look at where Spurs are in relation to Liverpool, Manchester United or even Leicester City. Their example proves that spending on top-class ability is non-negotiable;.

At Chelsea, it’s also alarmist to suggest that doors are closing on players like Mason Mount, Tammy Abraham and Callum Hudson-Odoi. They’ll be facing greater competition for their places, certainly, but that in itself is a very important part of their development. A young player has to be self-sufficient. Having the patronage of a head coach is important, but there’s a legitimacy which comes from rising to the top of a fully-stocked squad and that’s the opportunity that will soon be on offer to them.

For Mount, for Abraham, and for Hudson-Odoi, the aim is to become fully integral to a truly excellent side and, daunting as these new arrivals will be, players like Ziyech and Werner – and whomever else follows – are essential to that process.

For a precedent, they need only look at their own manager’s playing career. When Frank Lampard arrived at Chelsea in 2001, it wasn’t with any expectation that he would one day break Bobby Tambling’s goalscoring record. Lampard was viewed as a good player at West Ham and someone around whom an interesting team could one day gather, but that didn’t necessarily involve the winning of 106 England caps, a Champions League and three Premier League titles.

To illustrate his place in the game at that time, Chelsea beat off interest from Aston Villa and Leeds United to sign Lampard, not from Manchester United, Arsenal or Juventus.

And Lampard seemed to carry that inferiority and the doubts over his fee (£11m) with him in an energising and productive way. Hearing him speak about those early days is instructive, particularly when he describes how he responded to players like Gianfranco Zola and Marcel Desailly. Or how he presumably reacted to the many others would join the club.

Emmanuel Petit arrived at Stamford Bridge in the same summer as he did, already a World Cup and European Championship winner. Two years later, Juan Veron, Claude Makelele and Alexei Smertin were signed. Tiago came the year after, Michael Essien the year after that.

Was there a more challenging environment for a young player than Stamford Bridge at that time? It sounded ruthless, particularly after the arrival of Roman Abramovich, when another star from the game’s galaxy would arrive every twelve months. It wasn’t quite Florentino Perez’s Galactico project, but for someone like Lampard – with his chubby little face and perma-haircut – it might have been easy to have become lost in the glare.

But he didn’t. Beyond a certain point, he became fundamental to Chelsea and invulnerable to any new arrivals, but he was exposed to a lot of competition from bigger name players, with the happy result that he repeatedly rose to those challenges, invariably saw off anyone who sought to displace him and – eventually – became one of the finest players in the club’s history.

He didn’t just refine his existing abilities, either. He added new ones, finding different ways to complement those around him. He became excellent in the air. He perfected that tendency to arrive late in the box. He also lost weight and became much fitter, growing into a much more dynamic player than he had been at West Ham.

Was that always his destiny? Perhaps. It’s true that Lampard had a rare appetite for self-improvement and that he was manically dedicated long before he arrived at Chelsea. The stories of him running sprints, alone, at Chadwell Heath after dusk are legendary. He was told he wasn’t quick enough and, in true Lampard style, he tried to overpower that shortcoming, almost willing himself faster.

Nevertheless, it would be disingenuous to pretend that the climate of the club he joined and what it asked of him wasn’t at least partly responsible for his exponential improvement. And, using that as a reference, it’s easy to guess at the theory being applied to this current Chelsea generation.

These players are good enough to compete with the very best, so giving them the opportunity to do so – and removing the notion that they have a special, protected status – should actually be to their, and the club’s long-term benefit.

If they’re ever to be part of a team that wins the Premier League, then they need to be exposed to its harshest realities.