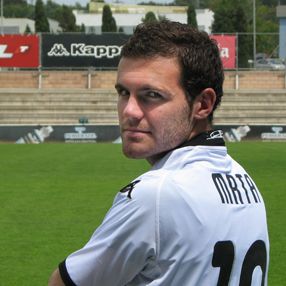 Juan Mata sits relaxed, arms crossed and leaning back, glancing across the pitch as we sit in the stand overlooking Valencia’s Paterna training complex. Thoughtful and softly spoken, the young Spaniard is regarded as one of the country’s finest prospects.

Mata represents Spain’s new generation, one that is keen to blot out the underachievement of their World Cup past, but to do so in the exhilarating style we grew accustomed to seeing during Euro 2008.

“Everyone says that we play beautiful football,” he says. “I think that’s what it takes to win, that’s what helped us win the European Championship and that’s a characteristic of the national team - our style of play - we don’t know how to play in any other way,” he insists.

If football fans are to be entertained this summer in similar fashion to that which was seen two years ago then it will be a sight to behold.

Brazil’s 1970s team has long been regarded as the most entertaining side to participate in the World Cup but with the likes of Xavi Hernandez, Andres Iniesta and Xabi Alonso pulling the strings in the heart of Spain’s midfield, they bring a passing game unrivalled by any in this year’s tournament.

“Every training session we have players like Xavi, Xabi Alonso, Iniesta, David Silva and Cesc Fabregas - players of the highest quality - it's wonderful being able to play with them.

“What Xavi and Iniesta, in particular, bring to the national side is a way of playing very similar to Barcelona’s style with lots of movement, lots of passing and lots of speed. Winning Euro 2008 gave us a lot of self confidence and we are keen to carry on from where we left off,” says Mata.

The Valencia number 10, who predominantly plays on the left wing for club and country, started out in Real Madrid’s cantera or youth system, after joining as a 15-year-old from Real Oviedo, the former club of his father, Juan Mata Senior, who was also a footballer and now acts as his agent.

It was the disappointment of being released that made Mata eager to prove that he was a footballer capable of playing at the highest level. Being let go didn’t surprise him, given the importance Real Madrid placed on superstar signings at the turn of the century rather than looking to promote players from their youth ranks.

“For a kid that just played for Oviedo, to then going to play for a team like Real Madrid it felt fantastic. But being taken out of my family home and moving away alone, into the residence Madrid have for young players, it was a bit difficult but as time passed I got used to it,” he recalls.

“It didn’t hurt leaving Madrid - it’s normal. There are a lot of people in the Real Madrid squad, and in most great teams, but they can’t all make it. I had the luck of being in Madrid. They sign some of the best players in the world and that really leaves fewer opportunities for young players.

“At 19 when I left I wanted to demonstrate the ability I had and fulfil the hopes that Valencia had in me when they signed me,” he says.

Now 22, Mata burst onto the scene for Valencia in 2008 scoring twice in the Copa del Rey semi-final against Barcelona, before grabbing the opener in the win over Getafe in the final, a day he describes as “one of the best in his life.”

Over the last two seasons Mata has emerged as one of Europe’s hottest young talents, bagging 14 goals in this campaign. And with Valencia’s amounting debt they have been forced to sell star players like striker David Villa to Barcelona, though Mata is unsure whether he will remain at the Mestalla come the end of the transfer window.

“I don’t know if I’ll be sold, it depends on the economic situation of the club, which right now isn’t so good. In the summer we have to raise a lot of money, and there is a possibility that they may have to sell players,” he says.

If he is to be sold a move to the English Premier League could be a possibility.

“In Spain they show many Premier League games on TV and it is an inspirational league. Maybe I would like to play in the Premier League.  At the moment I’m here, I love living in Valencia and playing in the Spanish league, but in England the league is also top class and there are many big teams. Who knows?” says Mata.

“I admire Arsenal and the philosophy that the young players have. Liverpool, with their Spanish players - they also have an incredible squad. And Manchester United and Chelsea are teams that are very big, like Real Madrid and Barcelona, with money and incredible players,” he enthuses.

Having represented Spain throughout all the main youth levels, it was current manager Vicente del Bosque who gave him his debut in the full national side against Turkey during the qualifiers last year.

And after making the final 23 man squad, Mata admits, to be on the plane to South Africa is something very special.

“For every player to play in the World Cup it’s the ultimate,” he says. “It is a wonderful opportunity to represent your country, and being so young it’s a dream. Especially being part of a team that is currently the champions of Europe,” says Mata.

Spain go into the tournament as favourites after winning all 10 of their qualifying matches, scoring 28 and conceding just five. Their opening game takes place on the June 16 against Switzerland in Durban, with Chile and Honduras make up the other contenders in Group H.

The favourites tag is something Mata and his team-mates are conscious of and although they are confident, don’t want to take anything for granted. Spain is a country that suffers from internal divisions from the Basque separatists in the north, to calls for Catalonian independence in the east. Though Mata believes the whole nation will be united in Spain’s quest for World Cup glory.

“Brazil, England and Argentina will be our main threats but we are in a good position, it will be important because now there is a lot of confidence after becoming European champions.

“The country is very hopeful, but from the perspective of the players and the coaches, there needs to be calm because winning the World Cup is no easy task,” he says.

“The whole country, regardless of what club the individual players belong to, will be united - the entire country will be behind them. The atmosphere in the squad is also very good - this is one of the most important characteristics of the national team,” Mata says.

Spain go to South Africa aiming to win their first ever World Cup and with a number of talented young players like Mata, will be hoping it’s the first of many.