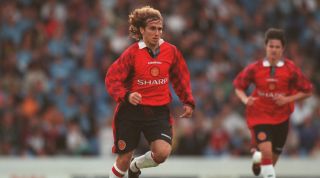 At the Czech Republic's first major international tournament, Poborsky helped fire his country to the final, where they eventually lost to Germany in extra-time.

Poborsky - named in the team of the tournament - was one of a few members of the team who earned club moves outside their home country.

Sir Alex Ferguson signed the then 24-year-old in the July of 1996, fresh from the Euros, but speaking in the new issue of FourFourTwo, the winger cites a huge culture shock as one of the defining reasons that he was unable to capture the same form as he did at international level in England.

"Moving from Slavia to United in the mid-'90s, it was like two different worlds," he says. "It was a massive step in my career, and in my life."

MORE FROM THE MAG

Teddy Sheringham exclusive: Beating the Netherlands 4-1 at Euro 96 was better than winning the 1999 Treble with Manchester United

"United had a great squad, but I didn’t speak English and the language barrier was the biggest issue. Growing up in Czechoslovakia under the communist regime, English wasn’t taught in grammar schools – we only learned Russian."

Poborsky says that the current manager at Old Trafford made an instant impression, in part thanks to his understanding of the language and his

"It was easier for players who arrived from other countries and could speak English. That was the case for Ole Gunnar Solskjaer, who joined United that same summer."

"When you go somewhere new, the first two or three months are so important to make a good impression. It’s not ideal when you can’t communicate properly."

"Ole was friendly, and many of the players were helpful."

Poborsky arrived in Manchester during a period when the Class of '92 were all developing and Eric Cantona was still the club's marquee player. But despite the talent that the Reds had to offer, the Czech claims that many of his team-mates were surprisingly down to earth.

"Eric Cantona was one of them – a cool guy, and very calm in the dressing room. He always told me that if I needed something, he’d help me. Sometimes the better the player, the more normal the person – and what a player he was. A genius. In the end, I was there for just 18 months."

"It was almost impossible for me to secure a regular place in the starting line-up ahead of David Beckham, at the beginning of his amazing career. But I don’t feel any bitterness. The players accepted me and I always tried my best, even though I only came on for the last 20 minutes of games. I didn’t have a problem playing for the reserve team – Jordi Cruyff refused to."

Read the full interview with Karel Poborsky in the February 2020 issue of FourFourTwo magazine, available to pre-order now, and out in shops and available digitally from Tuesday, January 14. This issue is a Euro 96 special, delving into the last time England hosted a major international tournament with interviews and features from Terry Venables, Gareth Southgate, David Baddiel and Frank Skinner, Karel Poborsky, Barry Davies, John Motson and many more. We also speak with Peter Crouch about life post-retirement, ask Darren Anderton your questions and chart the highs and lows of Panini stickers.