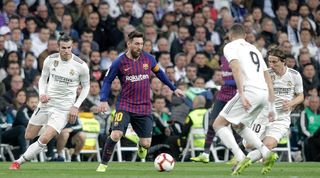 Terrestrial broadcaster ITV picked up the rights to show one match per week week for the first three fixtures of the Spanish football calendar in a last-minute move before the season started. However, the deal leaves no matches scheduled to be shown from September onwards. With the first Real Madrid vs Barcelona match not scheduled until November, doubt hangs over whether Clasico matches will be shown on British television at all this year.

Rights to show the full 2019/20 season were up for grabs this summer and, as FourFourTwo reported earlier this month, bids from unnamed broadcasters did come in, but were rejected by La Liga chiefs as below expectations.

Now Sky Sports, which had been the long-term British broadcaster for La Liga until 2018, has publicly confirmed that it has “no plans” to pick up the league again.

This tallies with industry insiders, who say Sky’s business model involves moving away from what are seen as ‘secondary sports’ packages, preferring to concentrate on the Premier League. Sky Sports remains the main British broadcaster for the English top flight, showing 128 live games this season.

Premier Sports, the subscription channel which shows Serie A games in Britain, said earlier this month that they were “hopeful” of securing a deal for La Liga, but had no confirmation so far.

We are hopeful of securing these rights but still no confirmation of their decision.— Premier Sports (@PremierSportsTV) August 8, 2019

Biggest Derbies in the World, No.2: Barcelona vs Real Madrid

The popularity of La Liga in the UK is based almost entirely around the Real Madrid and Barcelona rivalry, leaving broadcasting companies unsure whether to pay out on rights to the whole league package.

With La Liga boss Javier Tebas apparently determined to bring in greater income from selling TV rights – following lucrative deals in the American markets – it seems unlikely (if not impossible) that a deal would be struck that would mean showing only the Clasico matches.

How can I watch Real Madrid vs Barcelona on UK TV?

However, there is a small chance that UK fans will be able to see Leo Messi and Eden Hazard on the same pitch. Should both teams progress through the group stage, Barcelona and Real Madrid could be drawn against each other in the Champions League – something which has happened six times previously.

BT Sport holds the rights to show all Champions League games in the UK until 2021 – and you can find out how to watch them here.

What La Liga games will be shown on British TV this season?

QUIZ Can you name the players who've scored 10+ penalties in the Premier League?