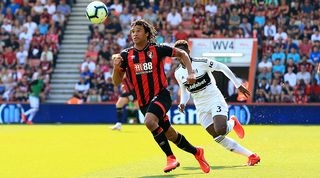 ‘Bad boy’ isn’t the tag you’d have thought to slap on Laurent Koscielny before this summer, but the Arsenal captain satisfied tabloids nationwide with his refusal to join the Gunners’ squad for their pre-season tour of the USA.

Koscielny has one year left on his current £100,000-per-week contract and now wants out – immediately. A move back to France seems most likely for the player who has over 350 appearances for Arsenal since arriving from Lorient in 2010.

Unai Emery will now (surely) look for an alternative as he aims to bolster an ever-questionable defence ahead of the new season. Luckily, there’s plenty of talent across Europe that could fill the gap...

The 22-year-old has been linked with a move away from Benfica this summer, and a number of clubs across the continent – including Manchester United, Wolves and Atletico Madrid – have been linked. Dias made 55 appearances for the Portuguese giants last season, netting four goals.

Dias made his debut at the start of 2017/18 and has been a regular ever since, leading to an international debut against Croatia in September 2018. His form subsequently earned him Portugal’s young player of the year award, and the 11-cap stopper started both of his country’s triumphant Nations League matches this summer.

Dias has a £57 million release clause and is contracted until 2023, but would be the ideal long-term option if Arsenal can invest.

Aké has been a permanent Bournemouth player since summer 2017, after a successful loan stint from Chelsea the previous campaign. The Dutchman now has 117 Premier League appearances to his name going into 2019/20, meaning he would only need to work on learning a new system rather than also having to adjust to a new league.

Manchester City have been linked with the 24-year-old as a long-term replacement for Vincent Kompany, and are reportedly eyeing Aké as a more viable alternative to Leicester City’s Harry Maguire. Not that the Dutchman would come cheap: he has a contract with Eddie Howe's side until the end of the 2021/22 campaign.

Another plus for Arsenal is that Aké, who spent more than three years at Stamford Bridge before his 21st birthday, can be included in the homegrown list.

Colossal central defender Tah has long been considered one of the most accomplished and coveted young centre-backs in Europe. In 2013, he became Hamburg’s youngest-ever player aged 17. Now, at just 23, he's the bedrock of a Bayer Leverkusen side that will battle it out in the Champions League next season.

The Germany Under-21 international made 38 appearances in all competitions last term and could easily fill the void should Koscielny depart after nine years with the Gunners.

Arsenal have raided the German club before, having signed goalkeeper Bernd Leno from them last summer for £22.5 million.

Having lost his place to Clement Lenglet in Barcelona’s starting XI last season, the French World Cup winner may feel that the time is right for a new challenge. Likewise, the 25-year-old may be considered for sale by the Catalan giants as they look to raise funds for Neymar.

Umtiti made just 14 appearances in all competitions for Ernesto Valverde’s side last campaign – partly though injury – and has previously been identified as a player who Emery would like to join the club. His stylish ball work, age profile and potential availability would make him a sensible target.

The Milan captain has hit the ground running since his £22 million move from Roma in 2015, and stepped up following the departure of Leonardo Bonucci to Juventus.

Romagnoli’s leadership qualities could make him the right fit for a leaky Arsenal rearguard, and at 24 he is already a commanding presence. The Italian only signed a new deal to remain at the Rossoneri last summer, however, and is contracted at San Siro until 2022.

Sporting director Paolo Maldini rightfully sees him as a big part of the club’s future, meaning a big fee would be required. That said, Milan have been excluded from the Europa League this season after failing to meet Financial Fair Play regulations, and are set to sell striker Patrick Cutrone to Wolves for a cut-price fee of up to £20m.

QUIZ! Can you name the Spanish players with 5+ Premier League assists?