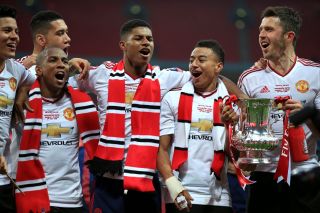 It was August 2014 and Louis van Gaal’s first starting lineup as Manchester United boss contained an unlikely name at right-wing-back. That name was Jesse Lingard, an attacking player by trade, but thrust into the limelight because of injuries elsewhere.

Lingard lasted only 24 minutes that day before succumbing to injury himself, but his selection showed from the very start that Van Gaal was willing to give academy graduates their chance. In the past two seasons, the Dutchman has handed first-team debuts to 14 of the club’s youngsters.

Van Gaal is a man prepared to play the long game, often to his own detriment. Manchester United lost 2-1 at home to Swansea in that first match as boss, and only now has his first trophy arrived. That it arrived thanks to a breathtaking volley from Lingard, one of those 14 debutants, will not have been lost on him.

Whether that trophy has come too late, and this still proves to have been Van Gaal’s final game as United boss, remains to be seen. The next few days and weeks have the potential to be intriguing. But even if he does depart this summer, it’s likely that United will be reaping the benefits of his youth policy for some time to come.

Who's who of debutants

Van Gaal never won the Champions League in two sometimes-turbulent spells at Barcelona, the first of which ended with the simple sentence: “Friends of the press, I am leaving, congratulations.”

But what he did do at Camp Nou was hand debuts to Xavi, Andres Iniesta, Carles Puyol and Victor Valdes. In doing so, he left a legacy – a legacy that would eventually deliver four Champions League trophies in nine years, long after he had departed.

Lingard may not be quite in the same class as that list of alumni, but it’s not impossible that 18-year-old Marcus Rashford could be one day, such is the promise that he has shown since being thrown into the first team by Van Gaal in February.

Rashford was superb in this cup final without scoring, showing some fine touches – most notably a flick to play in Marouane Fellaini, before being forced off through injury midway through the second half.

Van Gaal, one suspects, always knew Rashford’s ability. Back in November, when the clamour was for James Wilson to be handed a chance, he made a point of talking about his decision to include Rashford as a substitute for a game at Watford – albeit an unused one.

“Today I had RRRRRashford, Marcus RRRRRashford, on the bench,” he said with almost comically emphasised pronunciation, as he launched off on a tangent on an afternoon when none of the press were interested in writing about a completely unknown striker who hadn’t even got on to the pitch. “A fantastic talent,” he added. If no one else was aware of just how good Rashford was, Van Gaal certainly was.

FA Cup not enough on its own

Victory over Crystal Palace was not United’s finest performance, nor was it the finest cup final anyone has ever witnessed. For some, attention started to drift as the game went on. In the press box, one tuned in to the Coppa Italia final between Milan and Juventus, while another watched Hapoel Beer Sheva seal the Israeli league title.

Even in victory, there were some boos from United fans as Van Gaal was shown on the big screen climbing the steps to join the squad as they collected the trophy. In contrast, Alex Ferguson’s appearance on the screen prompted huge cheers.

This was United’s first trophy since Ferguson’s retirement, something that Van Gaal was keen to point out afterwards.

“I’m very proud that I’m the first manager after Sir Alex Ferguson to lift a trophy here,” he said. “I got a picture with him, because that’s history.”

But you sense it will not be enough for the new United to move out of Ferguson’s shadow. That will only happen with a league title, you suspect, and United weren’t even close this season. Fifth place is not something supporters will ever be prepared to accept, no matter how much Van Gaal tells them to lower their expectations.

A press conference to remember

Van Gaal arrived at the post-match press conference with a glare for the press, pointedly plonking the FA Cup down in front of him.

“Did you enjoy it?” was the tentative first question. “What?” he asked. The match, Louis, the one you’ve just won…

Questions about his future got short shrift. “I show you the cup,” he replied. “I don’t discuss it with my friends of the media who already sacked me for six months. Which manager can do what I have done? I don’t want to talk about leaving the club.”

Spare a thought for the press officer who has to try to manage the thing. It’s an impossible task, as the Dutchman launches into some tirade or other. This time, as the press officer tried in vain to wrap things up, the subject of his ire was the pre-match reports suggesting that Memphis Depay had decided not to travel to Wembley, having been left out of the squad that was pictured making the journey to London.

“Some friends of the media have written that Memphis was not here,” he complained. “They don’t know, but they write it. They want to undermine my authority. He was here.

“You can write but you have to to ask, but you are not doing that. You send a photographer and say, ‘Hey, Memphis is not there’. Borthwick-Jackson was also not there. They went on a later train because I want focus in my squad.”

It was classic Van Gaal, who then went off on a tangent about the time when all his full-backs got injured at the end of 2015.

“I have taken the risk not to buy players at that time, I gambled with youngsters,” he said, every ‘I’ becoming louder, more emphasised, more defiant. “Now I can be happy because we have won something.”

And with that he got up, lifted the cup and addressed the media with a substantial dose of sarcasm. “Thank you for the congratulations,” he said as he departed.

If those were his final words as United boss, they were fitting ones. Confrontational to the end, and keen to stress his emphasis on youth. That policy could yet pay off, whether Van Gaal is here next season or not.