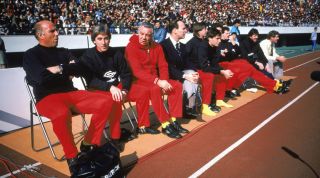 In December 1984, near the midpoint of the English season, the players and coaching staff of Liverpool took some time off from the First Division grind and travelled to Tokyo.

They had flown halfway around the globe not as part of a drive for the introduction of a winter break, but in order to contest the wonderful, wild and often dangerous Intercontinental Cup.

Opposing them in their efforts to become the de facto best team in the world would be Independiente, Argentina’s El Rey de Copas – the undisputed kings of the Copa Libertadores. It was to be a clash of the world’s two most prolific continental sides of the previous 20 years; between them, Liverpool and Independiente had won 11 European Cups and Copa Libertadores from 1964 to 1984. As it turned out, the match would also be a curtain call for both teams as masters of their continents.

Independiente had taken the Intercontinental Cup back in 1973. At that point, many fans would have considered it their greatest honour – particularly for South American sides, writes Andrés Campomar in Golazo: “The Intercontinental Cup came to be seen as the glittering prize. Vanity, that most Latin of personality traits, inculcated them with the desire to be crowned ‘world club champion’.”

Don't worry, the English are coming

Yet for all Liverpool’s achievements in the '60s, '70s and '80s, the Intercontinental Cup was the only trophy of significance they had failed to win. To Joe Fagan and his treble-winning generation of 1984, a side some consider the club’s best ever, fell the responsibility of filling the gap in the cabinet.

In their way stood not just an intimidating opponent – albeit one at the tail end of a golden age that had peaked the previous decade – but also a rather unimpressive English legacy in the competition itself. By 1984, in the five Intercontinental games English clubs had played, they had managed only one goal – netted by a Scot, Willie Morgan – and had not won a single match. Celebrated sides like Busby’s United, Barton’s Villa and Clough’s Forest had fallen to the likes of Estudiantes, Nacional and Peñarol.

Often, though, English (and indeed European) defeat was not always the result of being played off the park, but rather being kicked off it. En route to losing at Estudiantes in 1968, for example, George Best claimed firecrackers were flung at him – he subsequently returned the favour by punching an opponent in the second leg at Old Trafford – while Alex Stepney later presented the referee with a thrown bottle that had almost found its target.

Independiente themselves were no angels. During a match against Herrera’s Grande Inter, the Buenos Aires crowd pelted the Milanese with stones. So badly had Ajax been knocked about against el Rojo in 1972 that the Dutch club threatened to leave at half-time. The year before, Cruyff, Neeskens & Co. had declined to take their spot in the competition given previous violence, and may have regretted not making the same decision again.

“The Intercontinental Cup became a monster of UEFA and CONMEBOL’s making,” wrote Campomar. “A violent and ill-tempered affair that would have commentators, especially in Europe, clamouring for its termination.”

Deterred by the brutality, Liverpool refused to participate in 1977 and 1978, as did Nottingham Forest in 1979. Following this English boycott, desperately needed change came in 1980 when Toyota stepped in to sponsor the competition, which would from that point be played on neutral ground in Tokyo. Previously a two-legged home-and-away affair, the cup became a one-off final.

From the Falklands to Tokyo

As a result, English clubs (including Liverpool) returned to the fold but were soundly beaten each time. Sandwiched in between defeats for Forest in 1980 and Aston Villa in 1982, Liverpool were humiliated by Zico’s Flamengo in 1981. The loss chastened a squad that rightly placed itself in the pantheon of European football.

“They [Liverpool] were dead, physically and mentally,” declared Bob Paisley in the aftermath. “I have never seen them so dull, so lacking in ideas and aggression. I simply cannot understand it.”

However, as if past failures and on-field battles weren’t obstacle enough for the Merseysiders in 1984, the ugly spectre of las Malvinas also hung over the match.

“Everything was framed by numerous external events preceding the game,” commented Pedro Joaquín Iso, then president of Independiente. “There was talk that the encounter would be fought the hard way, because it was the first match between Argentina and England after the Falklands War.”

“Whether the players like it or not, they do carry extra responsibility out there,” said match commentator Peter Brackley during the opening moments of the game. “Bad behaviour or bad sportsmanship might be interpreted in an entirely different way.”

Within seconds of kick-off, Carlos Enrique flattened Craig Johnston, lyricist and winger, with a scything lunge. The referee duly waved play on. A minute or so later, Jan Molby hacked down Enrique in clear retribution. Unruffled, Enrique sprang back to his feet and dusted himself down. Molby calmly jogged back to the halfway line, ignoring a glare shot at him by the Brazilian official.

Yet the match, miraculously, failed to escalate into a boxing match. The teams were seemingly content to leave the competition’s vicious past behind, unwilling to re-enact the war for the watching public at home.

For several minutes after the opening salvos, Liverpool owned the ball, but couldn't manage to work it into Independiente’s penalty area. Warning shots were fired by the Argentines in response, accurate chips behind Alan Hansen and Gary Gillespie ruled narrowly offside. A pattern had been set that would define the remainder of the match: Liverpool probing, Independiente countering.

The breakthrough came in the sixth minute. Gillespie, replacing Mark Lawrenson at the back, had been caught out of position, dragged into midfield by Jorge Burruchaga. A simple dink over the top left José Percudani in acres of space and tearing down on Bruce Grobbelaar. Ten yards behind the Argentine, Hansen, Phil Neal and Alan Kennedy stood with arms thrust aloft, anticipating an offside flag that, this time, didn’t come.

Realising the danger, they began to hare off in pursuit of Percudani, but it was too late. The Independiente forward calmly lifted the ball over the onrushing Zimbabwean goalkeeper and into the net before wheeling away in celebration.

Under strict instructions from coach Pastoriza – in his third spell at the club in various roles since 1966 – Independiente sat back even more, tempting Liverpool to come at them but leaving their pacey strikers high upfield. Percudani and Alejandro Barberón charged behind the defence incessantly, fed by the gifted Ricardo Bochini, whose inclusion in Argentina’s 1986 World Cup squad was insisted upon by Diego Maradona. By half-time, the official running Liverpool’s line must have been in need of a sedative, so often had he been required to flag back a scampering forward put through on goal.

In the second half, Liverpool launched attack upon attack, only to be repelled by a disciplined backline led by the immaculate Enzo Trossero. John Wark and Molby probed constantly for the chink in Independiente armour, but couldn’t find it. On the infrequent occasion either managed to get goalside of the Argentine defensive midfielder Claudio Marangoni, who had a season at Sunderland in 1979, they would be halted abruptly by Trossero or his centre-back partner Hugo Villaverde.

Up front, the normally free-scoring duo of Kenny Dalglish and Ian Rush had rarely been so efficiently stifled. Dalglish did his best to create, continually dropping off the centre-backs, but his flicks found only tousled Argentine heads or flying boots. The moustache of Wark, who regularly pounded beyond Dalglish in hope rather than expectation of receiving the ball, bristled with indignation at the scant reward for his persistence. By the 76th minute he was substituted, having run himself into the ground.

The Reds were blunted, and did not equalise. The great Liverpool machine had failed to break down a resolute South American defence. England, for the sixth time, was denied a world club champion. It would take another famous treble-winning side, the 1999 Manchester United vintage, to break the curse.

At the final whistle, Independiente, led by Jose Pastoriza, who’d suffered a heart attack in the build-up to the game, celebrated with the aplomb that only a backs-to-the-wall victory can induce. “Independiente, Campeon Del Mundo!” screamed the front page of Buenos Aires-based magazine El Gráfico the next morning. Once again, Independiente were indeed champions of the world.

But it was to be for the final time.

Although neither set of players would have believed it back then, their reigns as continental supremos had all but drawn to a close. For Independiente, the 1984 final now stands as a marker for the end of the club’s time as South America’s predominant side. Within a few years, many of the squad’s best had departed, some for Europe, as the player drain kicked into gear. The club remained a force domestically, but have never recovered the Libertadores – although to this day no other club has won the trophy more times.

Their decline was illustrated plainly by relegation from Argentina’s top tier in 2013.

Two decades after his team’s last grand hurrah, Pastoriza’s bad heart finally claimed his life in 2004, the year the Intercontinental Cup itself ceased to be. He was in his fifth spell as Independiente manager.

It would take over 20 years and the onset of a new millennium for Liverpool to reappear on the world stage. They had been struggling in the First Division before the Intercontinental Cup final, and the loss in Japan set the tone for the rest of their season. Close rivals Everton, under Howard Kendall, ended up taking the league title, while the Heysel tragedy capped off a miserable year for Fagan’s men.

The club’s post-Heysel marginalisation in Europe is well documented, but in 2005 they returned to Tokyo as European champions, again failing to score in a 1-0 defeat to Sao Paulo in the Intercontinental’s more polite successor, the Club World Cup.

As the 2015 edition rolls around, the 10th anniversary of Istanbul has been and gone. Last season's failure to qualify for the Champions League has delayed achieving what Fagan, Dalglish & Co. could not.

For Liverpool, 'world club champion' remains – officially at least – the only title that has eluded them.