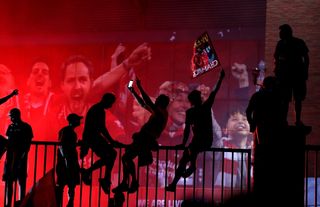 It’s not the way a purist would want to win a title race: without kicking a ball, because your rivals have dropped one.

But then again you sense Liverpool, having waited so long to regain the premiership they once took almost for granted, cared about as little as Alexander Chapman Ferguson did when a bloke called Michael Lavender wheeled toward him on the 17th green at Mottram Hall to tell him that Oldham had won at Villa and yes, Manchester United were once again champions of England after drought-filled decades.

And maybe the players were content to watch it on the telly, like the rest of us. After all, there would be nobody in the stands but the odd journalist and a substitute or nine.

WHAT'S NEXT? The 20 best Premier League sides by points total

This was always going to be a curious way to win a title, but Liverpool are understandably ecstatic anyway – and hang the asterisk-wavers.

No matter how long the gap between fixtures, no team that wins 28 of its first 31 league games, to defeat all mathematical possibility of capture with almost 20% of the season still to play, deserves any whataboutery. Those who lose a tight Premier League relegation battle might feel entitled to wave a tiny fist at an uncaring sky and grumble that things would have been different but for the virus. Pep Guardiola’s Manchester City can have no such complaints about not catching the uncatchable. The coronavirus coronation was inevitable.

While there is plenty of room for pointless debate on matters of style, and whether Jurgen Klopp’s sturm und drang side are aesthetic equals to peak-Pep trigonometric mesmerism, saying Liverpool are anything but worthy champions and exciting to watch would be the straw-man argument of the curmudgeon or ideologue. As football fandom has a plethora of both, those arguments will be trotted out, by those not old enough to remember the Reds’ domestic domination and those old enough to know better. Ignore the carping. Pep Guardiola certainly will.

Blown away by Liverpool’s consistency as much as their brilliance, Guardiola’s City lost their eighth league game in 31 – before this season they’d lost eight in 94, dating back to a 4-0 humbling at Ronald Koeman’s Everton in Guardiola’s first Mancunian January.

The sudden frailty of a side in transition led to another challenge faltering at Stamford Bridge, just like Mauricio Pochettino’s Tottenham in 2016 and King Harald Hardrada’s invading Norwegians in 1066. Leicester didn’t keep the crown for long, but they polished it for longer than Harold II, who within three weeks had lost his kingdom and his life to another crack continental outfit in a difficult away-day on the south coast.

The challenges come thick and fast when you’re there to be shot at, as Liverpool will now discover. Where once they had been fired by their hero’s quest – not to mention the desperate historical misfortune to only come second last season with a 97-point total that would have won just about any other major league ever – now they must maintain dominion over their newly-regained territory.

And as Macbeth would tell you, keeping the crown is a tricky affair. Only 12 different clubs have managed it in England, and only four since Wolves’ 1959 retention marked an unknowing last hurrah for the ‘town clubs’ that once formed the League’s backbone. Since then, variety – and an increasing array of competitions – has spiced up the competition, if only from a diminishing field of contenders: the previous 24 titles had been carved up by just five clubs. Another name has won the Premier League – a famous name, and less of a fairy tale than Leicester, but still storybook: a classical hero’s return from the wilderness.

Now, Klopp – surely the first Norbert to be a champion of England since Mr Stiles, shortly before Sgt Pepper struck up the band – must strive to add his name to a very short list of managers who have maintained their domestic hegemony for two or more seasons. Since World War II, it is a roll-call of football’s Valhalla: the yin and yang of Pep Guardiola and Jose Mourinho, the overarching figure of Fergie, the avuncular but relentless Bob Paisley, the formidably direct Stan Cullis, the almost mythical Matt Busby and – an unfamiliar face at the banquet – the astonishingly underheralded Pompey boss Bob Jackson.

Klopp must now set out to do what Shankly, Clough and Wenger couldn’t: retain the title. It may help that he has already conquered Europe and so may not feel the same urge to concentrate on foreign fields at the expense of domestic affairs. It will be interesting to see how they strengthen, and how Klopp plays his freshly-bought cards when the games come thick and fast next season – assuming there is a next season squeezed in between this unavoidably extended campaign and the rebranded Euro 2021. History will be written by someone, and it’s usually the winners. Klopp’s job now is to keep Liverpool thundering ever onwards in a manner that would appease even Paisley. These are the halls in which he now walks, and only a churl could deny the man and his club the pleasure that brings.