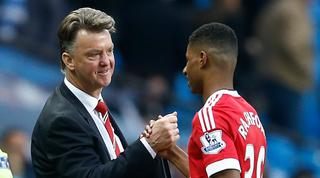 Some academy players are slowly coaxed into the first team by patient, avuncular coaches, others find themselves thrown into the deep end as a last resort. The latter was certainly the case for Manchester United forward Marcus Rashford when making his debut in 2017.

Mention the word ‘Midtjylland’ to Rashford and, even now, he’s overcome with emotion.

“Just pride,” he tells the April issue of FourFourTwo, out now. “The manager didn’t say much to me beforehand – he told me to express myself; don’t be any different to how I had been playing in the under-18s. I went out there and tried to enjoy myself. The game went how it went... then everything was different.”

Rashford had been asked to lead the line in United’s crucial last-16 Europa League second leg tie against the Norwegian top flight side at the last minute, following a warm-up injury to Anthony Martial. The then 17-year-old rose to the occasion, scoring twice in a 3-1 victory. He followed that performance by scoring the winning goal against Arsenal in the Premier League four days later. The rest, as they say, is history.

Despite being more or less forced to do so, Van Gaal’s decision to hand Rashford a debut is something the England international will always be grateful for.

“It was one thing him saying it, but when he actually gave me my debut, that was the moment,” Rashford recalls. “Even though you’re young, he trusts you to go out there and do the job.”

“I was just happy to be on the pitch, wearing a Man United shirt,” he says. “It’s something you dream about, from when you’re six or seven years old. Even if I hadn’t scored two goals, I would have felt proud. The goals were that little bit extra.”

Four years later, he tells FFT that, no matter what he achieves from here on in, those will always remain the most special days of his life. “For me, yeah,” he says. “I’ll never forget those four days. Even the goals in those matches – they’re not my favourites, but in terms of what they meant to me, they’re far ahead of the rest.”

Read the full interview with Marcus Rashford in the April 2020 issue of FourFourTwo magazine, out in shops and available digitally from Thursday March 5. Our new magazine reveals the stars of the decade – the 50 wonderkids who'll rule the next 10 years, with an exclusive interview with Erling Haaland, Vinicius Jr, Gabriel Martinelli, Ruben Neves, and Reece and Lauren James – as well as profiles of Trent Alexander-Arnold and Kylian Mbappe. We also chat to Steve Clarke and Mick McCarthy and Scotland and Ireland in the Euro 2020 playoffs, revisit the last time Liverpool won the league, and chat to Nobby Solano, Yakubu and Wes Brown about their careers.