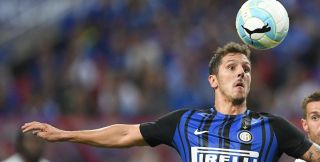 If you’re targeting a marquee signing, it’s probably a good idea to do your research on the player – which is exactly what Marseille chief Jacques-Henri Eyraud clearly didn't do.

When the 49-year-old began to converse with Jovetic in the helicopter, not recognising the Montenegrin striker was the very same man he was talking about, Eyraud began to explain that Marseille had plans to sign him and that a medical had been booked.

The former Manchester City man quickly made his identity known, that he was on his way to Monaco and had already been pictured wearing Kylian Mbappe’s No.10 shirt.

Inter Milan striker Jovetic’s move is expected to be announced shortly, following a brief spell with the Italian giants and a loan at Sevilla.

A puzzled Eyraud has now been left wondering where is he going to find a suitable striker before Thursday’s transfer deadline. Maybe he'll plan the next move a little better.