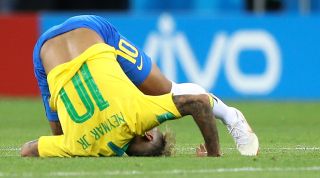 Remember a lifetime ago, when England’s social media cool cats convinced a load of annoyingly over-energetic kids to yell the names of the players as part of the official 2018 England squad announcement? We could barely contain our smirks as these young bozos, who know nothing about the pain of supporting England, blared out the names of our deeply unexciting squad.

“Harry Maguire!” yelled some idiots. Calm down, we tutted. “Jordan Pickford, reppin’ for the Mackems!” bellowed a Wearsider. He’s hardly Gianluigi Buffon, you teenage ignoramus, we bellowed back.

And it wasn’t just us – it was you, admit it. The reaction was pointing and mocking and scoffing. But now these men are our beloved heroes, it almost came home and we have delicious, runny egg all over our face. Mmm, face egg.

The odd thing? We were almost right in our condemnation. The difference between knighthood and turniphood is razor thin: if Colombia had scored that last-minute sitter, this mob would have skulked back to Blighty as villains, and the inquiry into their haircuts, tattoos and overwhelming stupidity would be ongoing.

Gareth Southgate would have been written off as a pleasant failure. Waistcoats would have fallen from fashion once more. But we were wrong. So, so wrong. Shout it, kids.

Opening ceremonies are an odd idea at World Cups anyway, but Russia’s decision to book Stoke-on-Trent’s top turn, who peaked about 10 years ago, made this one odder still. What was wrong with a bit of Rachmaninoff? Where were Pussy Riot? (What’s that? In a Gulag after their pitch invasion?! Let’s move on.)

Anyway, Bob got the gig, and did a pretty fine job of it – a traditional, end-of-the-wedding romp through Let Me Entertain You and Angels – before bafflingly spoiling the clean family fun by raising his middle finger to the cameras at the end.

“At these things, it’s really important not to cause an international incident,” he later told a judgey Pip Schofield. “And do you know what? I managed it. I can’t trust me. I don’t know what I’m going to do at any time. There was no sort of plan. The plan was to sing in key.” Wally.

Batshuayi hits himself in the face

Trying his damnedest to not beat England in the group stage, Roberto Martinez popped hulking goal machine Romelu Lukaku on the bench, and gave Michy Batshuayi a runout. The plan didn’t work - Belgium won - but the likeable Chelsea chap’s biggest impression on the World Cup was spooning the ball off the post and back into his own face in celebration, and later tweeting: “Ahahha I knew I would be f*cked the minute I come to my mentions, why am I so stupid bro – s*** hurts.”

The was accompanied with 12 of those crying laughing emojis, so it was officially hilarious.

Germany were going to win the World Cup

There were a bunch of last-minute set-pieces scored in this World Cup (England vs Tunisia, Morocco vs Iran, Uruguay vs Egypt, Portugal vs Spain) – but none looked more ominous than Germany’s against Sweden.

After looking likely to go out after just two games, Toni Kroos pumped in a ruthless free-kick – and everybody in the entire world outside Germany turned to their friends and said: “I bet they win the whole bloody thing now…”. Alas, nobody had counted on South Korea.

There was some stiff competition for the title of Argentina’s biggest berserker out in Russia. There was Nicolas Otamendi, who twice kicked balls into the heads of prone opponents (Ivan Rakitic and Paul Pogba). There was Begbie-esque gaffer Jorge Sampaoli (above), prowling the sidelines with a vein bulging from his neck, thinking stabby thoughts. There was whoever let Willy Caballero go in goal. And there were Javier Mascherano and Cristian Pavon, who apparently ‘went to the pineapples’ – a tasty Argentine term for fisticuffs – after the Croatia defeat.

But, as usual with most things Albiceleste-related, Diego Maradona went furthest. Sitting in the crowd wearing two watches; handing off suspicious packages to friends on camera like a hustler from The Wire; staggering from his seat and collapsing in a chair; being aided by a group of minders; giving Nigeria a middle-finger salute – it was chaos, and ultimately, all pretty tragic.

Little wonder Leo Messi was caught rubbing his eyes and furrowing his brow like a man about to take 10 schoolgirls to Disney On Ice: he was a sensible oasis in the middle of hell.

Seeing Artem Dzyuba cause chaos for the first time

Unless you’re a keen follower of Zenit, or had sat through Russia’s interminable fixtures in the buildup to the World Cup, you’d probably not marvelled at Dzyuba before.

It was quite a sight, seeing this terrifyingly large, unmarketable human closet go to work against the tiny ants of Saudi Arabia; made all the scarier as big Vlad Putin cackled evilly about his creation alongside the Saudi Crown Prince. Will they be cloning more of him for a tilt at Euro 2020? We hope so.

VAR shambles of Portugal vs Iran

Let’s admit it: despite there being an incorrect call in the final, VAR worked pretty well. The ref getting info through his earpiece from the Moscow officiating nerve centre and rushing to his glare-laden screen to consult the replays added a new layer of drama – and while that will wear thin in the future, the fact that it reduced diving by a reported 23%, and made more correct decisions than wrong ones, is certainly welcome.

It made players behave better, and it prevented any Hand of God/Lampard-over-the-line calamities. Without it? It would have been a totally different tournament, with different winners in several games – many of them caused by easily correctable mistakes that we’d all have gone mad about.

That said, there was one match in which it just went bananas: Portugal vs Iran, in which referee Enrique Caceres became overwhelmed by players getting in his ear, and spent almost the entire match rewatching it in segments on the sideline.

Japan tidying up after themselves

Japan, Senegal and Uruguay fans were all caught doing whatever the opposite of shaming football is – making football proud? – by tidying various stadiums on their way out. But those lovely lads from Japan were the only team not to leave their dressing room littered with empty Deep Heat tubes and Freddo wrappers.

Despite being eliminated by Belgium in the most heartbreaking circumstances, the Samurai Blue buffed their Rostov Stadium room sparkling clean, leaving a sign saying “spasibo” (thanks). They can come and stay with us any time.

It’s been a great World Cup on almost every level – but a rotter for its triumvirate of really big stars. Cristiano Ronaldo and Messi got packed off home on the same day, but Brazil’s rainbow-flicking poster boy perhaps had it worst of the three.

His rolling around like a pathetic toddler has been ridiculed worldwide and immortalised in a zillion videos. But it shouldn’t overshadow his other great moment of shame: appearing in the early group games with a haircut that would have made an '80s pop sensation wince.

Worst of all, he was publicly embarrassed on the matter by Eric Cantona, who Instagrammed himself clutching a picture of the forward, with a face of utter disdain, and half a pound of spaghetti atop his cranium. Think on.